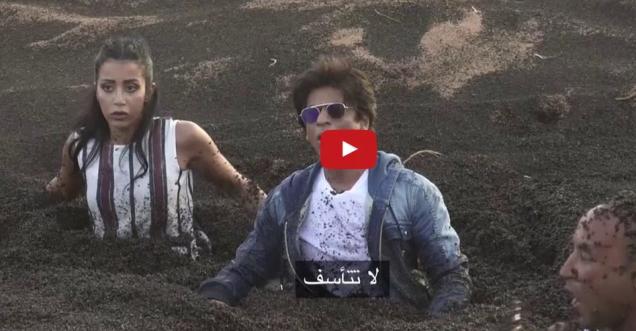 Mumbai: A video of a Shah Rukh Khan is widely viral on the social media. The king of bollywood is screaming and shouting at the anchor Ramez.

Watch the video of Shah Rukh Khan with the Komodo below:

It can be seen in the video shah Rukh Khan is stuck in a muddy pit, somewhere in Dubai. A lady  in the video is also stuck along with the king of bollywood.

The lady with Shah Rukh screams with fear as their car plunges into the pit. Her screaming and shouting makes the video more of a real. Though it looks like more of a fabricated one from both this actors.

A Komodo dragon can also be seen as a part of the prank which slowly moves towards Shah Rukh and the lady along with him, which is none other but the Ramez Galal.

But soon after Ramez (dressed like the Komodo) shows up him self, which leaves Shah Rukh completely miffed.

Shah Rukh Khan was in Dubai for some promotional event, he has also posted a picture with Ramez Galal.