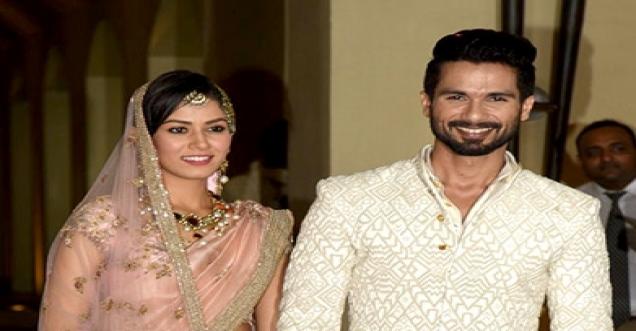 Shahid Kapoor and Mira Rajput came on Karan Johar  show Koffee with  Karan. Here the couple shared   everything openly on the show from their relationship, when they met first time, about marriage and how they spend quality time with each other.

He may have been criticized for publicizing arranged marriages and cracking jocks on his age difference with his wife. Now, in an interview he has opened up about the whole episode.

"A mainstream star having an arranged marriage is unique. It is not every day that a Hindi film hero goes and marries someone no one even knows of. I am an actor. Most parts of my life are up for discussion, by default. It won’t stop whether I like it or not. If people cross the line, we do get displeased. But the line itself is wide. We can’t be touchy and say, bhai mere baare mein koi baat nahin karega," he told Mid-Day

About Mira, he said, "Mira seems pretty chilled out about what’s written. My wife decides what she wants to do, where she wants to go, how she wants to go and who is allowed in the house. It is natural. In fact, that’s how it should be." they both realized they were deeply in love after Mira got pregnant. “Pregnancy brings a couple together. From You and I we became ‘Us’,” said Mira.

Having dated many actresses in the past, Shahid said, “he was single for four years and wanted to be with someone when his parents suggested he meets Mira. The actor add that even though he was not familiar with the arranged marriage set up, he was now a big supporter of that ‘format’. “I think the graph for arrange marriage is a lot better in the long term."