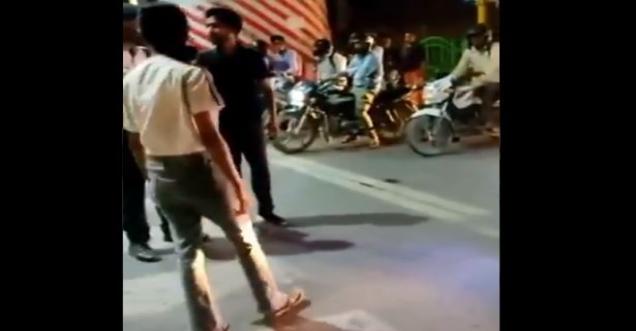 A video is viral on social media. In this video, a young woman is slapping a young man. Along with this, the traffic policeman is also standing. The video is being said to be from Lucknow.

The video is from Friday 30 July. Awadh intersection of Krishnanagar in Lucknow. A girl was walking on the road. A cab driver came to pass by near her. She alleged that the speed of the car was very fast and the girl was hit by the side of the car. The police stopped the car at the intersection. After this, the girl beat up the cab driver fiercely on the middle road. The girl told the police that she narrowly escaped from the speeding cab. The girl alleges that the youths in the car were harassing her. Not only this, she was also hit by the side of the car. On the other hand, the driver has accused the girl of breaking the side mirror and phone.

In the video, a young woman is seen beating up the cab driver. She is slapping him one after the other. The policeman tries to intervene, but the girl continues to beat up the cabman. It is seen in the video that the side mirror of the cab is also broken. A young man who is trying to save the cabman, the woman also catches him. During this, there are many people at the crossroads.

As per reports, the cab driver Saadat Ali was returning from the airport at 10 pm. Dawood Ali and Inayat Ali were also with him. Due to the mistake of Saadat Ali, who was driving carelessly, the girl narrowly escaped the accident. When the girl asked him to drive carefully, he started arguing. According to reports, the cab driver abused the girl and started running away from the spot.