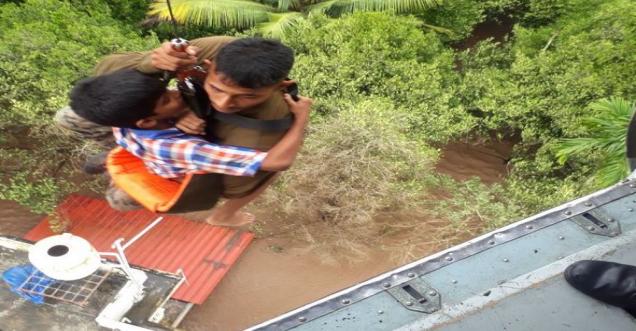 The National Crisis Management Committee (NCMC), in its third meeting today in three days, reviewed the ongoing massive rescue and relief operation in the flood affected areas in Kerala. The meeting held under the chairmanship of the Cabinet Secretary Shri PK Sinha, discussed in a video conference with the Chief Secretary of Kerala the current flood situation and deployment of rescue teams, motorboats, helicopters, life jackets; provision of food, water and medicines; and restoration of power, telecom and transport links wherever they were disrupted.

In the unprecedented efforts being mobilised under the instructions of the Prime Minister Shri Narendra Modi, 67 helicopters, 24 aircraft, 548 motorboats and thousands of rescue personnel from Indian Navy, Army, Air Force, National Disaster Response Force (NDRF), Coast Guard, other CAPFs, have been pressed into service to rescue and evacuate people from submerged areas to relief camps and for distribution of relief materials. More than 6,900 life jackets, 3,000 life buoys, 167 inflatable tower lights, 2,100 raincoats, 1,300 gumboots and 153 chain saws have been provided as per the request of the State Government.

The Cabinet Secretary directed five more helicopters to be mobilised by IAF, Navy and ONGC which will be pressed into service by tomorrow. Additional motorboats have also been put on standby for deployment.

So far, various Central Ministries have made available food, water and medicines which include 3,00,000 food packets, 6,00,000 MT of milk, 14,00,000 litres of drinking water, 150 potable water purification kits with capacity of 1,00,000 litre each. Railways informed that trains have been running to Thiruvananthapuram via Erode and Madurai. It offered to run a special food and medicine train from Thiruvananthapuram to Ernakulam as per the requirements of the State Government to distribute food and medicines to all the stations on the way.

In the review meeting, it has been decided to make the Naval airstrip at Kochi functional for commercial flights by 20th August. The meeting also reviewed various measures to restore power lines, petrol pumps, LPG, health facilities, and to provide necessary medicines, food and fodder etc with full support from the concerned Central Ministries.

With a view to improve telephone connectivity, the Department of Telecom has enabled intra-circle roaming which will enable subscribers of one service provider to access mobile towers of other service providers. All the operators have offered free data and SMS facility from yesterday. Mobile towers called ‘Cellular on Wheels’ are also being deployed to ensure that no Block remains unconnected.

The Ministry of Health has made ready emergency medicines and medical teams for deployment as soon as flood waters recede. The Cabinet Secretary directed that there should be proper coordination and distribution of the relief materials which are being offered by various State Governments and other agencies.

#Update #KeralaFloods2018. Infants, sick & needy; we are reaching to all. Naib Subedar Manbar Singh of 13 Garhwal Rifles led his column and carried out  operations in 8-10 feet deep water for full day and rescued 536 persons. We are at it. #OpMadad #KeralaFloodRelief @PIB_India pic.twitter.com/qGvrLGmIyx

Chief Secretary, Kerala, while appreciating timely Central assistance, informed that there is some respite from the rainfall and water level in the dam reservoirs are stabilized. Further, as per IMD forecast, rainfall is expected to recede further barring in one or two districts.

The NCMC will meet again tomorrow to review the situation.