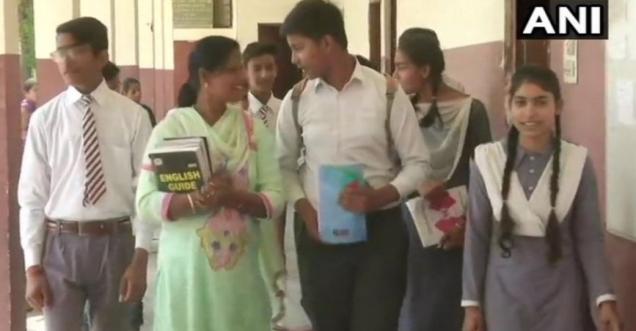 Ludhiana (Punjab) [India], Mar. 29 : Proving that education and attaining knowledge has no age limit, a mother and son duo here are jointly preparing to appear in the Class 10 Board examination.

44-year-old Rajni Bala had completed Class 9 in 1989, but due to an unfortunate family circumstance, she had to give up her education. Eventually, she was married and began her family life.

"My husband has been telling me for several years to complete my education. However, I had three children and had to educate them. Although I am working as a ward attendant in a civil hospital, I realised that it is important to pass Class 10 at least, in the present day. Therefore, I began preparing along with my son, who is also in Class 10. We go to school together and study also together," Rajni told ANI.

While the initial days were awkward for Rajni, she said with the support of her husband, children, and mother-in-law, she was able to overcome her initial inhibitions and work hard to achieve her goal.

"My mother-in-law, in spite of being uneducated herself, motivated me to take this decision. My husband has been very supportive; he wakes up early to teach me and my son. My daughters also help me study. Eventually, I would like to pursue my graduation," she said.

Meanwhile, her husband, Raj Kumar Sathi, opined that it is important for one to complete their education in this day and age, irrespective of their age.

"I myself pursued my graduation after a gap of 17 years. I felt that if I can do it, so can my wife. We wake up early to study and she goes to school with my son. They also go for tuitions together, which has been very helpful to her," he said.

Echoing a similar thought, Pawan Gaur, Principal of Lajwanti Senior Secondary School here, where the mother-son duo are studying, stated that when individuals come back to complete their education after several years, it sends a very positive message to the society at large