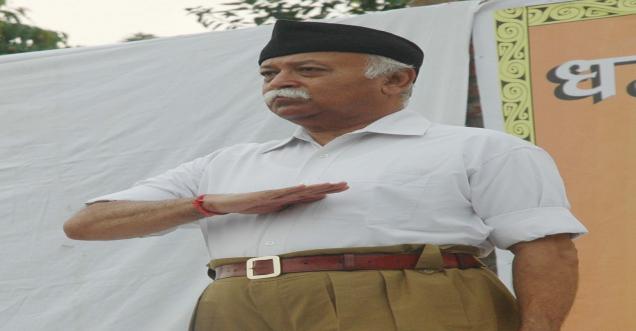 New Delhi: While releasing the book The Meeting of Minds by Dr Khwaja Iftikhar, who was an advisor to former Prime Minister PV Narasimha Rao in Ghaziabad, the RSS chief said that we are one and its basis is our motherland. We are descendants of common ancestors. The DNA of all the people of India is the same.
Sangh chief Mohan Bhagwat attacked people in the incidents of lynching and said that such people are against Hindutva. He said that without unity, the development of the country is not possible and the basis of this unity should be nationalism.

Below are the highlights

1. Discussion of DNA
Mohan Bhagwat said that the talk of Hindu-Muslim unity is misleading because both are not separate but one. He said that the DNA of all Indians is the same, no matter what religion they belong to. One cannot differentiate between people on the basis of worship methods. He said that it has been proved that we are descendants of the same ancestor for 40 thousand years. The DNA of people in India is the same.
The mention of DNA has come many times before in Indian politics. It was discussed the most during the Bihar assembly elections. When PM Modi mentioned Nitish Kumar in gestures. After that, it was also mentioned in the UP elections and Rahul Gandhi was targeted. The DNA statement of the Sangh chief given on Sunday will once again be discussed. It will be a big point for the opposing political party.

2. Is Islam in danger in India?
RSS chief Mohan Bhagwat said that do not fall into this cycle of fear that Islam is in danger in India. He said that the development of any nation is not possible without unity in the country. He emphasized that the basis of unity should be nationalism and the pride of ancestors. He said the only solution to the Hindu-Muslim conflict is 'Samvad' and not 'Visamvad'. He said that there is no threat to Islam in India. Muslims should not live in any such fear. He said that if a Hindu says that a Muslim should not live here, then that person cannot be a Hindu.

3. Sangh chief said this on mob lynching
Attacking those involved in mob lynching, RSS chief Mohan Bhagwat said that such people are against Hindutva. The cow is a sacred animal but those who are killing others are going against Hindutva. The law should take its course against them without any bias. 4. Sangh does not do politics
Mohan Bhagwat said that we are in a democracy. It cannot be dominated by Hindus or Muslims. Only Indians can dominate here. Bhagwat started his address by saying that he has neither joined the event not to create any image makeover nor for vote bank politics. He said that the Sangh is neither in politics nor does it care about maintaining an image. The RSS chief said that the Sangh continues its work for empowering the nation and for the welfare of all people in the society.
AIMIM chief and Lok Sabha MP Asaduddin Owaisi has targeted Rashtriya Swayamsevak Sangh (RSS) chief Mohan Bhagwat's statement on mob lynching. Owaisi alleged that every time Muslims become victims of lynching and this hatred is a product of Hindutva which has the support of the government.

Owaisi's target on the government
Asaduddin Owaisi has given his response to the statement of the Sangh chief by tweeting on Monday. Apart from this, he has also attacked BJP, raising the issue of Akhlaq and Asif. Alleged Owaisi that the government works to support the criminals involved in the lynching.


Alleging lynching of Muslims, Owaisi said, 'Cowardice, violence and killing are an integral part of Godse's Hindutva thinking. The lynching of Muslims is also the result of this thinking. He said, "Alimuddin's killers are garlanded at the hands of the Union minister, tricolour is put on the body of Akhlaq's killer, a maha panchayat is convened in support of those who killed Asif, where the BJP spokesperson asks if we are murdered.
Digvijay Singh asked- Will the Sangh chief give this education to Modi-Shah
Senior Congress leader and former Madhya Pradesh Chief Minister Digvijay Singh also hit back at Bhagwat's statement. Digvijay Singh tweeted and asked, "Mohan Bhagwat Will you give this idea to your disciples, preachers, Vishwa Hindu Parishad / Bajrang Dal workers also? Will you give this education to Modi-Shah and BJP Chief Minister also?"

Umar Ahmed expressed happiness
Expressing happiness over the statement of Mohan Bhagwat, All India Imam Organization Chief Imam Umar Ahmed has welcomed his statement. Let us tell you that Mohan Bhagwat had said during a program that the DNA of all Indians is the same, regardless of the religion they belong to.