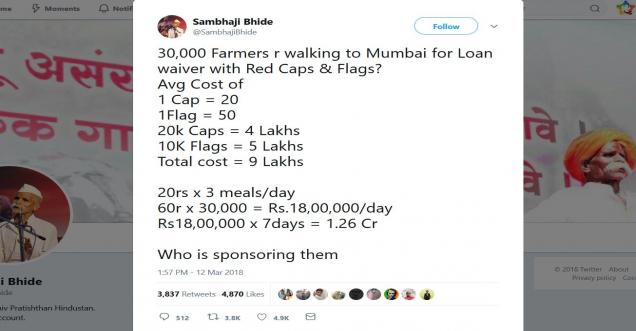 India, Mumbai: 40 thousand people walked for six days. Nasik to Mumbai About 180 kilometers. Eating and drinking all along the way. There was no violence, no violence. There was no news of traffic jam from anywhere. The long march reached Mumbai, even then there was no news of jam from anywhere due to the discipline of the farmers, quite strange. No 'common man' had any problem. They used to sleep at night at the side of the road, under the open sky. There was no 'trekking gear' for the long way. The person who had slippers came in with the slippers and those who did not came even without a slipper.

Keep going that the children going to give paper papers did not get trapped in jam. When he reached Mumbai, people welcomed him. Someone gave a bottle of water, someone used to eat, and somebody started slippers in the farmers running barefoot. Despite these problems, there was so much patience in them and they were finally heard by Devendra Fadnavis's .

But there were also some people who were sitting comfortably on a smartphone and were questioning on March. None of these had applied this math - Question are being put now in the social media regarding who is the sponser of all this. It is a real strange that so many people walked all along, night and day, there must be someone to galvanize all this and believe me, nothing happens unless there is a political support behind a movement.

According to this mathematical calculation, the amount of 1.26 crore was collected by calculating the hats, flags and food of the people running in March. It is being asked who paid this amount, who is the sponsor of the long march?

Now people have started to ask this question and it is genuine.

Who is sponsoring them

Who is sponsoring them

What are their demands do you have any idea?
I'm from the very 1st day supporting these farmers and also somewhere wanted to see #Swaminathan advices should be implemented for famers well fare.
But now when I know #cpim is playing dirty politics in this I'm very depressed! Link pic.twitter.com/JFOIzPCF0S

Did the left party like the CPM supported this entire movement, than what was the gain they would have got by all this.

The people who participated in the movement were asked to take some rice, food and basic medicine from home itself. They were also asked to keep some money, which could be used in case of any emergency in the way. Yes there were some red caps, but not everyone. These people did not go to Mumbai to raise the flag or 'revolution'. These were the ones who went to Mumbai to tell the government that they are dying. They are dying of hunger.

The truth is that this long march's sponsor was fear. The Fear of death of hanging oneself and his family the fear of hunger will lead you to death. If this was not a sponsor, then forty thousand people would never get together.

Well, those who have asked this question would be able to understand their minds, then these questions do not come in their mind again.