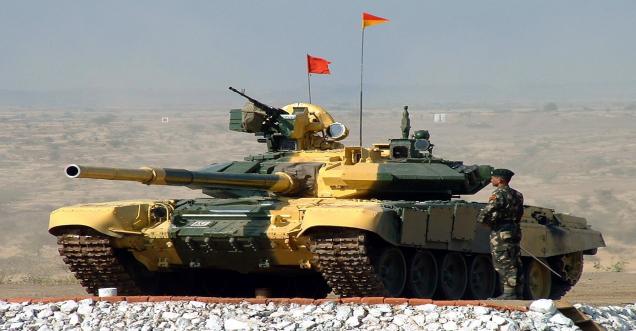 Get this image on Wikimedia Commons | License details

New Delhi, ANI. The Indian Army is fully prepared to deal with any Chinese army during winter in East Ladakh. Infantry Combat Vehicles including T-90 and T-72 tanks have been deployed near LAC in the Chumar-Domechok area amid continuing tension with China. Their specialty is that they are capable of operating at temperatures up to minus 40 degrees Celsius near the Line of Control.

Speaking to ANI, Chief of Staff of 14 Corps Major General Aravind Kapoor stated that the 'Fire and Fury Corps' is the only formation of the Indian Army that has deployed mechanized forces in such harsh areas. Maintaining tanks, infantry fighting vehicles, and heavy guns is a challenge in this area. Today all our logistic preparations are sufficient to ensure the preparation of crew and equipment.

#WATCH Indian Army deploys T-90 & T-72 tanks along with BMP-2 Infantry Combat Vehicles that can operate at temperatures up to minus 40 degree Celsius, near Line of Actual Control in Chumar-Demchok area in Eastern Ladakh.

Note: All visuals cleared by competent authority on ground pic.twitter.com/RiRBv4sMud

He said that the cold in Ladakh is going to be very harsh. Our preparations are completely under control during winter. We have sufficient quantities of ration, fuel, oil, clothes, heating appliances with more calories, and nutrition. Currently, the Army is using 3 types of fuels for these vehicles to ensure that fuel does not freeze during harsh winters.

T-90 and T-72 tanks along with BMP-2 Infantry tank deployed in Chumar and demchok along LAC in Eastern Ladakhpic.twitter.com/IkfzCInsSo

The tank is considered one of the biggest inventions of the 20th century in war-related matters. The credit of building the tank is given to countries like Britain, France, and Germany. This invention happened during the first world war. Before the arrival of the tank, the battle was in trenches. It was called Trench Warfare. There was no strong arrangement to avoid the bullets coming from the front to climb the enemy out of the trench. But the arrival of the tank marked the beginning of mobile warfare. Mane fights gained momentum. With the presence of tanks, the work of infantry (infantry) becomes easy. They can move forward under its protection, and the tank with its large cannon can also target the enemy, where it is firmly fixed. Tanks later became an integral part of the wars. The second world war was mostly fought with tanks.

But what is a tank?

The tank is an armored combat vehicle. But you can also call it a moving bunker. Common ammunition has no significant effect on it. An armored front can be formed by combining several tanks, which can climb at high speed on the enemy. Tanks are very useful in the field and desert.

Each tank has a large cannon. Its ball falls on the enemy like a hammer. Apart from this, other guns and equipment can also be installed in the tank. The tank has two main parts.

>> First - plow - this is the bottom of the tank. It is made from a thick sheet of very strong metal. The driver and crew sit here, in quite a safety. Here it is decided which way the tank will go or turn, it operates from the plow.

>> Second - Turret - The turret is an armored structure supporting one or more guns -- typically a heavy cannon and a couple of machine guns. ... Turning the traverse gear rotates the turret on the hull, allowing the tank crew to aim the main gun without turning the entire tank. The crew can also pivot the main gun up and down.

The top-gun gun in the tank is part of the turret. A gunner sits in it. The turrets of all modern tanks can rotate 360 ??degrees. Apart from this, the cannon is also upside down. Due to the rotating turret, the tank can aim at a very large range without changing its direction. If the enemy suddenly comes behind the tank, then the tank will not have to take reverse. It will spin the turret and shoot the enemy.

Above two reason makes a tank a deadly weapon. Many tanks are capable of aiming even while running at full speed.

A tank is a very heavy weapon, So normal wheels cannot bear its weight. Hence metal wheels are used. They are called road wheels. Their number increases according to the size of the tank.

T90 Bhishma - used by the Armored Corps in the Indian Army, has a total of 8 road wheels. 4 on one side, 4 on the other side.
The installation of metal wheels solves the weight problem of the tank. They are not punctured like rubber tires. But there comes a problem. The metal wheels drift in the ground. Since the tank is very heavy, the problem of this sinking gets bigger.

To distribute the weight, the wheel of the tank is put on a wide strip with a wide. This is called Continuous track. The weight of the tank is divided over a large area from the track. Because of this our tank does not sink into the mud, nor into the sand. With the help of tracks, the tank can move on a difficult path.

The continuous track is a system of vehicle propulsion used in tracked vehicles, running on a continuous band of treads or track plates driven by two or more wheels. The large surface area of the tracks distributes the weight of the vehicle better than steel or rubber tires on an equivalent vehicle, enabling continuously tracked vehicles to traverse soft ground with less likelihood of becoming stuck due to sinking.

The story of the naming of the tank is also interesting. Actually, Britain was working on armored weapons. But wanted to keep its name a secret. Therefore, they were making water tanks. After this, it started to be called a tank. In September 1916, tanks were used for the first time in the war. Britain first introduced them to the war.

It is a battle tank, that is, it is used on the battlefield. It has been built by Russia and is a third-generation tank. T means tank in it. 90 because it was made in the 1990s. It first appeared in the world, In the year 1992. It is counted in the modern tanks of the world. These tanks were designed to replace tanks like T-72, T-80. It is said that the T-90 tank has been built on the platform of the T-71 tank.

How is the weight and height of the T-90?

This tank is 3.78 meters wide, 2.20 meters high, and 9.53 meters long. The T-90 is a heavy tank. Its weight is about 46 tons. It runs on a diesel engine. A maximum of 1600 liters of fuel can be put into it. The T-90 tank can run at a speed of 60 km per hour on the normal route. Whereas its maximum speed is close to 50 kilometers per hour on bumpy roads. It is made at the Uralvagonzavod factory in Nizhny Tagil, Russia. T-90 tanks can be carried anywhere.

India definitely bought T-90 tanks from Russia but made changes according to the Indian needs. The entire platform of the T-90 tank was kept as of Russian. Platform means the basic structure of the tank. But India with the help of France changed the weapon system and missile to protect the tank.

Where Tanks were used in the war in India.

- Russia used it in the Chechnya area in 1999. According to the Moscow Defense Brief report, in this battle, a T-90 tank was fitted with seven RPG anti-tank rockets.

- In the year 2015 also in Syria, Russia launched these tanks into the battlefield. In February 2016, the Syrian Army also used these tanks.

Which countries have these tanks

Apart from India and Russia, Algeria, Armenia, Azerbaijan, Turkmenistan, Syria, Uganda also have these tanks. Iran Countries like Peru, Libya, Vietnam, Cyprus, and Venezuela also showed interest in purchasing T-90 tanks. But the deal could not be done due to different reasons.

The cost of a tank is 20 to 33 crores. The price keeps on fluctuating according to the different features of the tank requirement.

What other tanks does India have?