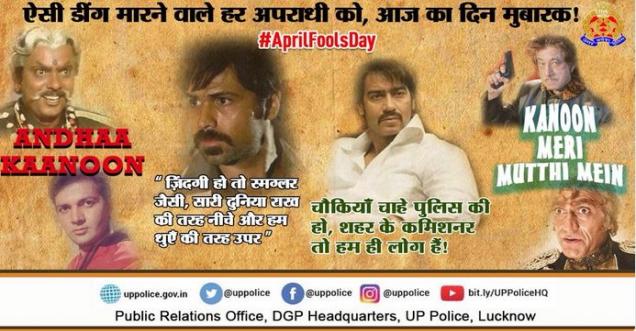 New Delhi [India], Apr. 01: The Uttar Pradesh police flashed a glimpse of its funnier site on April Fool's Day with a light-hearted tweet on the social media platform, giving an hilarious reminder to all the criminals out there that the life of crime cannot take one far, and trolling them while at it.

"Kuch to karan hoga ki villain anth me maara jaata hai (There must be some reason as to why the villain always dies in the end) #AprilFoolsDay," read the tweet.

The tweet features a number of iconic Bollywood stars, who have portrayed prominent villainous roles, where their characters have openly mocked and often outfoxed the police forces.

The tweet featured Amrish Puri's Mogambo from Mr. India, Ajay Devgan's Sultan Mirza and Emraan Hashmi's Shoaib Khan from Once upon a time in Mumbaai, among others with a caption that read, "Aisi dhing maarne waale apradhi ko aaj ka din mubarak (to the criminals who act cocky like them, our compliments on today's occasion) #AprilFoolsDay."