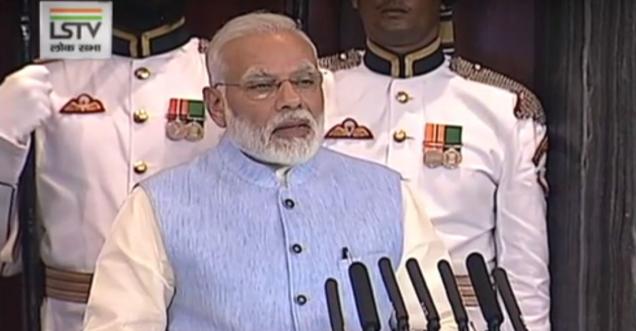 New Delhi: Making a brief address before the launch of Goods and Services Tax (GST) from the Central hall of Parliament House, Prime Minister Narendra Modi said that it would build a better India. He said that GST was a shining example of cooperative federalism.

GST stands for Goods and services tax, however modi during the launch event described it as Goods and simple tax.

Check the entire launch event on the GST

The Prime Minister added that GST was a result of hard work of all political parties. He said that several people had worked together to make GST a reality. Shri Modi stated that GST would unify the country with a single tax system. He added that the GST was an achievement for 'Team India'. "GST is a result of a long thinking. The states, along with the Centre discussed it for years", he added.

The Prime Minister further said, "GST would unify the country's economy." He also recalled Sardar Vallabhbhai Patel's contributions in unifying the country in this context.

The Prime Minister said that GST, was not only Goods and Services tax but also 'Good and Simple Tax'.

President Pranab Mukherjee also termed the launch of Goods and Services Tax (GST) to be historic.