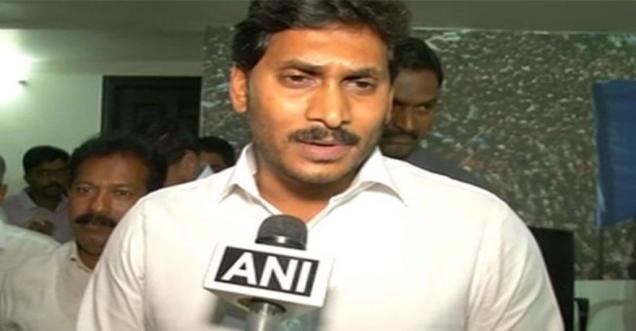 Addressing a large gathering as part of the Paraja Sankalpa Yatra here in Guntur district, Reddy said, "Our Party MPs would resign on the last day of the budget session and march to Andhra Bhavan in New Delhi where they would sit on an indefinite fast demanding SCS."

He added that students, party cadre and common people will also hold relay hunger strikes across the state.

"Across the state, there would be relay hunger strikes by students at their respective university campus and at all assembly constituency levels by party cadre, youth, and other sections of the society along with party state leaders," he said.

The Leader of Opposition also trained guns at Chief Minister Chandrababu Naidu and termed him as 'shameless' "who is busy in theatrics".

"Chandrababu Naidu has been very shameless to announce that his MPs would not quit as there should be some representation of his party in the Parliament. The Chief Minister has been resorting to theatrics which would yield him Oscar Award in the Best anti-hero category," said Reddy.

He alleged that since four years, Chandrababu Naidu had been watering down SCS and foiled all attempts of the YSRCP, be it protest rally, hunger strike or Yuva Bheri programmes.

"Now, the Chief Minister is trying to pose himself as a champion of the cause by meekly putting forward weak proposals like wearing black badges and not confronting the Centre or holding any dharnas and asking the student to keep away from the agitation," said the YSRCP president.

He added that if all the 25 MPs of Andhra Pradesh quit en masse the amount of pressure being mounted on Centre would be immense but Chandrababu Naidu has been trying to save his skin by asking his MPs to stay away from the resignations.

Reddy said that Naidu tried to hijack YSRCP's issue of no trust vote.

"The volte-face of the Chief Minster was seen when he said on March 15 that he can only support the no-trust motion if there are sufficient numbers. But, on the very next day came forward to issue the no-confidence motion. However, it was YSRCP that wrote letters to leaders of all political parties seeking support to the no-trust motion and the Chief Minister tried to hijack it, but in vain," Reddy said.

The YSRCP supremo also alleged that Naidu asked members of his party to quit from the Union Cabinet on Union Finance Minister Arun Jaitley's recent statement which was not different from his 2016 statement.