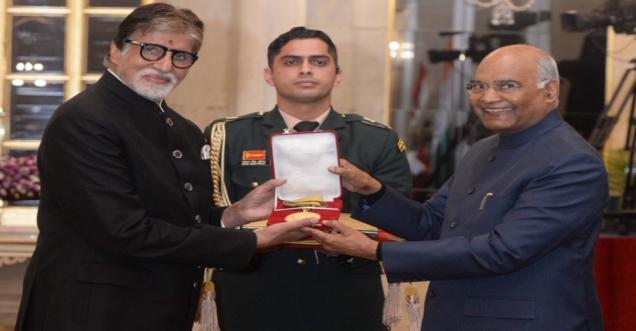 India: President Ramnath Kovind honored actor Amitabh Bachchan with the Dadasaheb Phalke Award, the highest honor of cinema, at a special function held at Rashtrapati Bhavan here on Sunday. Earlier, Bachchan was to receive the honor at the National Film Awards ceremony on Monday, However as the 77-year-old actor could not attend the ceremony due to ill-health.

Information and Broadcasting Minister Prakash Javadekar had announced that Bachchan would be honored with this award at a special function on Sunday by the President of India.

The Dadasaheb Phalke Award is India's highest award in cinema. It is presented annually at the National Film Awards ceremony by the Directorate of Film Festivals, an organization set up by the Ministry of Information and Broadcasting. The recipient is honored for their "outstanding contribution to the growth and development of Indian cinema" and is selected by a committee consisting of eminent personalities from the Indian film industry. As of 2017, the award comprises a Swarna Kamal (Golden Lotus) medallion, a shawl, and a cash prize of ?1,000,000 (US$14,000).

The actor thanked the government, the Ministry of Information and Broadcasting of the National Film Awards for choosing him for the award.

On this occasion, Bachchan said in his speech, "God has been kind to him, my parents' blessings are with me, the support of industry filmmakers, producers, and co-stars has been with me." I am grateful for the love and constant encouragement from the Indian audience. I stand here because of them. I accept this award with utmost humility and gratitude. ''

In the Hindi film industry, Bachchan, who started his career with the film "Saat Hindustani" in 1969, attended the ceremony along with his wife and MP Jaya Bachchan and son Abhishek Bachchan.

In his film career of five decades, Bachchan remained at the top and surprised his fans with memorable work in films.

Born in 1942 at the home of renowned Hindi poets Harivansh Rai Bachchan and Teji Bachchan, Bachchan began his career as an actor with the film "Saat Hindustani". However, the film was not a success at the box office.

The actor finally tasted success through Prakash Mehra's action film "Zanjeer" in 1973 after delivering several flop films. The film made him known as the 'angry young man'.