Amul Butter has now paid tribute to the late Bollywood actors Rishi Kapoor and Irrfan Khan, through an advertisement. 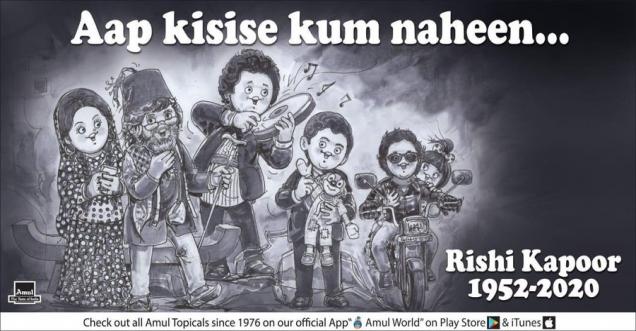 New Delhi: Amul Butter has now paid tribute to the late Bollywood actors Rishi Kapoor and Irrfan Khan, through an advertisement. People who loved this actor are now loving the advertisement.

#Amul Topical: He was a great and very popular star over many decades! pic.twitter.com/1W3Anwj0Ww

On the other hand, to pay tribute to Irrfan Khan, the ad features his acclaimed characters like 'The Lunchbox', 'English Medium', and Paan Singh Tomar.

The punch line for the advertisement for Irrfan is, " Tribute to one of our finest actors...."

#Amul Topical: Tribute to one of our finest actors... pic.twitter.com/KGzeudA0ho

The punchline for the advertisement for Irrfan is, "A tribute to one of our best actors."