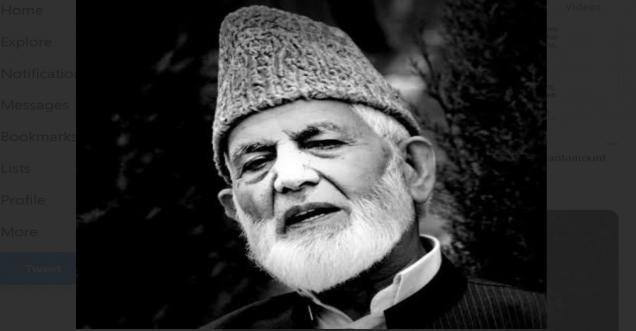 Srinagar: Anees-ul-Islam, grandson of separatist leader Syed Ali Shah Geelani, has been thrown out of government service in Jammu and Kashmir. The Jammu and Kashmir government dismissed Anees-ul-Islam, the grandson of late separatist leader Syed Ali Shah Geelani. was fired using a special provision under Article 311 of the Constitution. Islam was appointed Research Officer at the Sher-e-Kashmir International Conference Center (SKICC) in 2016 by the then Mehbooba Mufti government.

The central government took this action on Saturday (October 16, 2021), 45 days after the death of 'Hurriyat Conference' leader Syed Ali Shah Geelani. Along with him a teacher from Doda was also thrown out of government job.

A few days before his appointment as a government servant, he had visited Pakistan (31 July 2016 to 7 August 2016) and met Colonel Yasir of the ISI, quoting his grandfather Syed Ali Shah Geelani. Let us inform that after the death of terrorist Burhan Wani in an encounter, Anees's grandfather, Geelani had engulfed the entire Kashmir Valley in the fire of violence. It is learned that there was pressure from top officials in the government to appoint Anees and the entire recruitment process was manipulated.

ANI tweeted, “J&K: Anees-ul-Islam, grandson of separatist Syed Ali Shah Geelani dismissed from service with immediate effect. He was working as Research Officer in Sher-e-Kashmir International Convention Centre. The dismissal comes in accordance with Article 311 (2) (c) of the Constitution.”

J&K: Anees-ul-Islam, grandson of separatist Syed Ali Shah Geelani dismissed from service with immediate effect. He was working as Research Officer in Sher-e-Kashmir International Convention Centre. The dismissal comes in accordance with Article 311 (2) (c) of the Constitution. pic.twitter.com/xIGehlKteF

Anees's entire family has been a supporter of terrorism

It is an open secret that the 2016 movement was the brainchild of Jamaat-e-Islami and Geelani-led All Parties Hurriyat Conference. Gilani, who died recently, put hundreds of youths to death to get jobs for his jihadi grandson. Not only Anees but his entire family has been a staunch supporter of terrorism and separatism. It is learned that before joining government service along with a team of his anti-India friends, he used to get drone videos of law and order incidents and other incidents in and around Srinagar city and with Pakistan's intelligence agency ISI. Used to share all the footage.

There was massive manipulation for the appointment of Anees

It was also revealed that the appointment of Anees was largely manipulated. Anees' appointment to a gazetted grade equivalent post in the government-funded and controlled SKICC is believed to be a deal between the then chief minister and Geelani to quell violence during the Burhan Wani agitation, as the post was held since 2005. was lying vacant and there was no immediate need to fill it. But after Anees returned from Pakistan, the authorities showed great speed in finding vacant posts in SKICC.

The situation in Jammu and Kashmir is appalling at present. In the capital Srinagar, terrorists killed two civilians from outside states on the same day.