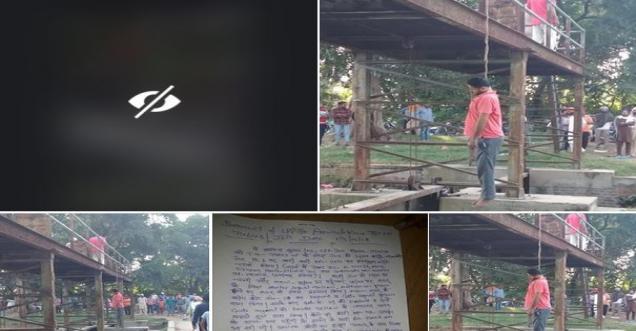 Kota (Rajasthan): Recently there was a huge uproar in Rajasthan over the lynching of a Dalit man beaten to death in Rajasthan’s Hanumangarh. There is a slugfest between Congress and the other opposing parties.

In yet another incident, a couple in love allegedly committed suicide in Rajasthan's Bundi district after being upset over opposition to their marriage due to caste reasons. The police gave this information on Sunday. The incident took place on Saturday night in the area under the Hindoli police station area here. According to the police, the bodies of Devraj Meena (24) and Priyanka Meena (20) were found hanging from a tree. The woman's body was recovered from a well under a tree, possibly due to the breaking of a tree branch.

Mukesh Meena, in-charge of Hindoli police station, said that both committed suicide because their families did not allow them to marry each other. The police have handed the bodies over to the relatives after post-mortem. The police are investigating the matter in detail.

According to the family members, Devraj Meena, 21 son Ramswaroop Meena, resident of Dumala's slum of village Net and Priyanka Meena 20 daughter Soji Lal, resident of Pal's slum has committed suicide. The deceased youth was found hanging on a tree with a rope around his neck at the well of Devraj (Kavanra Gurjar). While the body of the girl Priyanka was seen floating in the water by hanging with a sardine. Both had left the house last night. The girl had left the house at 8:30 last night, who did not return, while the young man left the house after 12 o'clock in the night. In the morning the bodies of both were found hanging on the noose. After this, the police was informed. The police, who reached the information, took the body in possession and kept it for post-mortem in the hospital mortuary. Where post-mortem of both is being done. Further action will be taken based on the report of the family members.

Meanwhile, in a separate incident, a 30-year-old man from Shivpuri in Kota committed suicide on Saturday over problems in his married life.