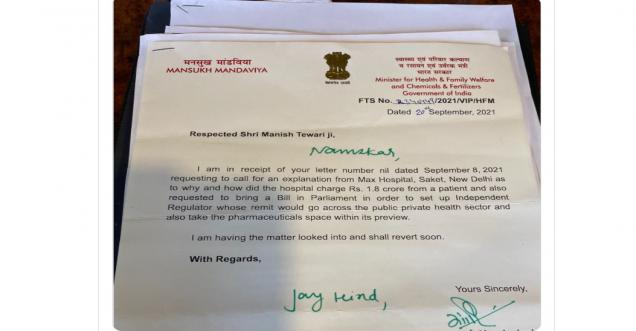 New Delhi: Congress leader Manish Tewari had written a letter to Union Health Minister Mansukh Mandaviya in connection with the recovery of Rs 1.8 crore from the patient by Max Hospital in Saket. Delhi, after the hospital, charged a COVID patient Rs 1.8 Crore, to which the health minister replied.

Health Minister @mansukhmandviya ‘s letter promising to look into the 1.8 crore bill charged from a Patient by Max Hospital Saket.

I request @attorneybharti to please ask Chief Minister NCT Delhi @ArvindKejriwal to do the same as Health is a state subject. pic.twitter.com/byOTFUQXuk

The letter reads, "I (Mansukh Mandaviya) have received your letter number zero dated September 8, 2021, requesting an explanation from Max Hospital, Saket, New Delhi as to why the hospital charged Rs 1.8 crore from a patient. And also requested to bring a bill in Parliament to set up an independent regulator, which will preview the pharmaceuticals sector along with the public-private health sector. I am getting the matter investigated and will respond soon."