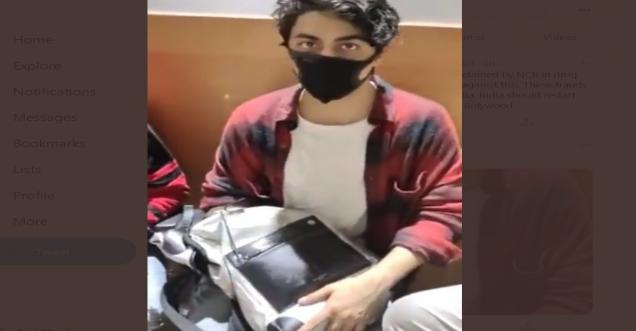 Mumbai: NCB is questioning Shahrukh Khan's son Aryan Khan in the Rave Party case going on in the cruise in Mumbai. NCB is interrogating a total of 8 people in this case and one of them includes Shahrukh's son. During interrogation, Aryan has denied taking any kind of drugs. Those being questioned include two fashion designers from Delhi.

In this case, NCB has issued summons to 6 people and called them to appear today. All of them were the organizers of the rave party and it is also being told that apart from two famous drug peddlers from Delhi and Haryana, some drug peddlers from Madhya Pradesh and other states of the country had also joined the party. Arrangements were made for the consumption of drugs in the rooms in the cruise. NCB investigation is on.

Mean while actor Sunil Shetty said, “When a raid is conducted at a place, many people are taken into custody. We assume that a particular boy must have consumed it (drugs). The process is on. Let's give that child a breather. Let real reports come out”

#WATCH | When a raid is conducted at a place, many people are taken into custody. We assume that a particular boy must have consumed it (drugs). The process is on. Let's give that child a breather. Let real reports come out: Actor Sunil Shetty on NCB raid at an alleged rave party pic.twitter.com/qYaYSsxkyi

What did NCB say?

The statement of NCB has also come out in this matter. NCB director SN Pradhan has said that 'action will be taken against the accused film star or industrialist. No matter how big the name is, action will definitely be taken. This action will be taken in future also. An NCB official said that two women were also among those taken into custody in this case. Apart from Aryan Khan, others have been identified as Munmun Dhamecha, Nupur Sarika, Ismeet Singh, Mohak Jaswal, Vikrant Chhokar, Gomit Chopra and Arbaaz Merchant. Arbaaz Merchant is Aryan Khan's friend. Arbaaz went on a cruise along with Arbaaz.

Eight people have been detained for questioning (in connection with the seizure of drugs from a party at a cruise off Mumbai coast). On the basis of the information that we would receive from them, further raids will be conducted: NCB chief SN Pradhan to ANI pic.twitter.com/wnnCgrMhVK

Drugs like MDMA, Ecstasy, Cocaine, MD (Mephedrone) and Charas were recovered during the raids on Saturday evening. The Anti-Drug Agency has registered an FIR in connection with this celebration party. Acting on a tip-off, a team of NCB led by its regional director Samir Wankhede raided the Goa-bound Cordelia cruise ship on Saturday evening and recovered narcotics from some of the party passengers, the official said. This rave party was going on a cruise named Cordelia. NCB raided this high profile rave party. Several people were also detained and the drugs recovered from the cruise were confiscated. A rave party was organized in the name of a musical event. Online booking also done. In lieu of booking, tickets were given to people ranging from 80 thousand to 1 lakh rupees. Drugs like cocaine, MD, charas, ganja were also arranged in the party.

Son of Shahrukh Khan, #AryanKhan has been detained by NCB in drug syndicate. Not 1 Bolywood A list star has spoken against this. These frauds give us lecture on social issues by managing media. India should restart the campaign against these नशेड़ी, गंजेड़ी, चरसी in Bolywood

"During the operation, the suspects were searched and different intoxicants were recovered from them which they had hidden in their clothes, underwear and (by the women) purses," he said. That those detained after completing the legal formalities will be produced in court later today. Earlier in the morning, the NCB interrogated the detained persons at its office here, he said.