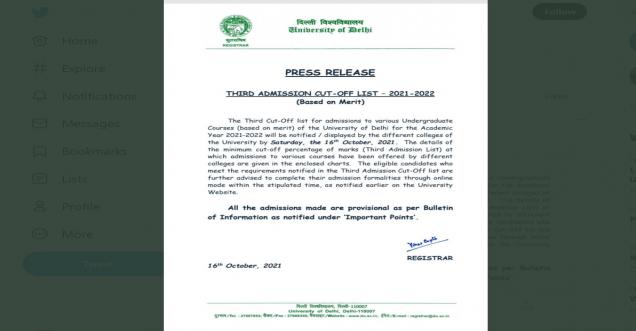 New Delhi: The University of Delhi or Delhi University (DU) on Saturday released the third cut-off list (DU cut-off list 2021), which has reduced the mandatory marks for admission to undergraduate courses by 0.25 to 1.5 per cent. However, the cut-off for preferred courses is still high. The nomination process under the third list will start from October 18.   Just to make you aware, many Delhi University colleges closed admissions for a lot of courses just after the first and second list was released.

The cut-off for Bachelors (Hons) in Economics at Indraprastha Mahila College is 98 per cent, while that of Ramjas College is 98.75 per cent. Shri Ram College of Commerce (SRCC) has the highest cut-off of 99.50 per cent for Economics.

The cut-off for the same course at Sri Venkateswara College is 98.50 per cent. The cut-off in the first list for BA (Hons) and B.Com (Hons) in Economics at SRCC was 100 per cent.

- DU third cut-off list PDF will appear on the screen