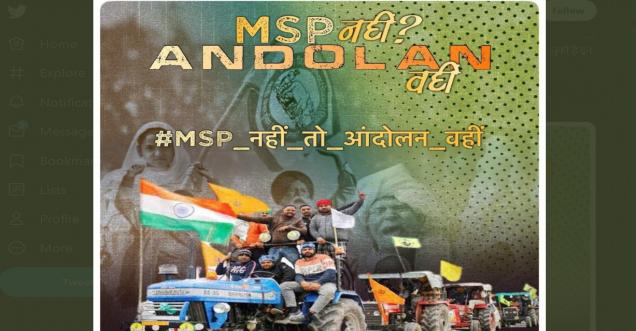 New Delhi: Farmers' organizations have said that the agitation will continue until the central government withdraws all three agricultural laws and guarantees the Minimum Support Price (MSP) . This was announced after a meeting of the Kisan Sanyukta Morcha at the Singhu border in Delhi. In the KSM meeting held for the first time after the decision to repeal the three agricultural laws, a consensus was reached on the demand for an MSP guarantee, compensation to the families of farmers killed during the agitation and withdrawal of cases filed against the farmers. It has been reported from sources that the Union Cabinet in its meeting on Wednesday may approve bills to withdraw three agricultural laws.

Farmer leader Balbir Singh Rajewal told that it has been decided in the meeting that an open letter will be written in the name of Prime Minister Narendra Modi, in which the pending demands of the farmers will be mentioned. He told that in that letter the MSP committee, its powers, its time limit, its duties; Electricity Bill 2020, and return of cases filed against farmers will be mentioned.

He said that the letter will also demand the dismissal of the Union Minister (Ajay Mishra Teni) in connection with the Lakhimpur Kheri incident. Rajewal told that the Kisan United Front will now meet again on November 27. After that, the further strategy will be decided in view of the situation.

Samyukta Kisan Morcha leader Ravindra Patial said in a conversation with NDTV, MSP, compensation to the families of the deceased farmers, cases filed against the farmers were the important issues of today's meeting." He said, "Modi ji has taken a good step. Hope he will take good initiative in future also. A letter is being written from our side to the Prime Minister, in which we will keep all our points.

He said that on the 26th one year of our movement is being completed. After that, on 27th we will hold our next meeting in which the further strategy will be decided. In response to a question, he said that if our demands are accepted then why would we sit, we would go ourselves. But till the demands are not met, the rest of our programs will continue as before.