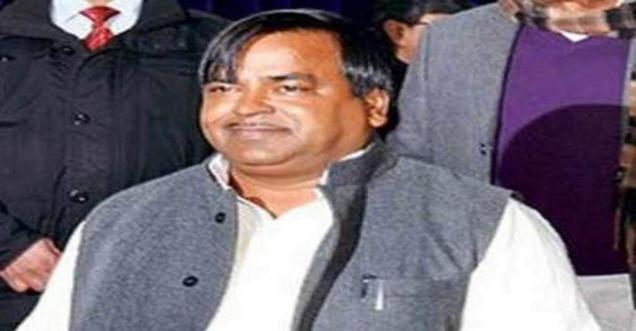 Lucknow: The Lucknow Bench of the Allahabad High Court has stayed a July 30, 2021, bail granted to Gayatri Prasad Prajapati, a cabinet minister in the previous Samajwadi Party government (SP), from the MP-MLA court (Special Court of MPMLA) in a cheating case. Along with this, the court has also issued notice to Gayatri. Gayatri is already in jail since March 15, 2017, in the gang-rape case.

The order was passed by a single bench of Justice Rajiv Singh on an application filed by the state government seeking cancellation of Gayatri's bail. The next hearing of the case will be on November 16, 2021. On behalf of the government, Additional Advocate General Vinod Kumar Shahi and Anurag Verma had argued that Brij Bhuvan Choubey, a director of his company, had lodged an FIR against Gayatri at Gomti Nagar Extension Police Station on 17 September 2020.

Gayatri Prajapati, Anil Prajapati and one other woman were named in the said FIR. The counsel for the applicant has submitted that a woman had been administered some intoxicant and raped by the opposite party as well as others accused. It has been claimed that obscene photos of the aforesaid victim were taken. She was being blackmailed and forced to have sexual intercourse with the accused.

The Supreme Court passed an order dated February 17, 2017, directing the concerned police station in UP to register the FIR on the basis of the complaint and further directed the Police to investigate the matter and submit its report in a sealed cover within seven weeks from the date of order. Hence a case under Sections 376D, 376, 511, 504, 506 IPC and Sections 3/4 POCSO Act, Police Station Gautampalli, District Lucknow was lodged on February 18, 2017, against seven persons, namely, Gayatri Prasad Prajapati, Ashok Tiwari, Pintu Singh, Vikash Verma, Chandra Pal, Rupesh and Ashish Shukla.

It was argued that the special court of MP-MLA, without considering the statements of witnesses taken during the investigation and criminal history of Gayatri Prajapati, granted her bail on July 30, 2021. After hearing the arguments presented by the government, the bench has stayed the order of the special court of MP MLA on 30 July 2021 till further hearing, expressing the need for consideration of the matter.