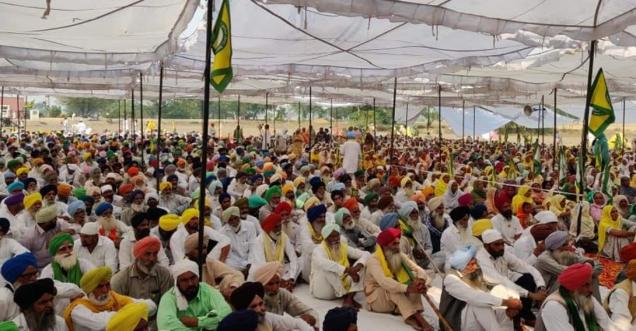 The ultimatum given to the administration by the farmers' panchayat held in Narnaund on Saturday has been fulfilled but till now the demands of the farmers have not been accepted. Farmers will gherao the SP office in Hansi today to get their demands fulfilled. It is being claimed on behalf of the farmers that apart from the state, farmers of Punjab, Rajasthan and UP will reach Hansi in this gherao. After the call of the United Kisan Morcha to reach Hansi to the farmers, the administration has also started preparations for this at its level. The police force has been called from all the districts of the range in Hansi, while 11 duty magistrates have been deployed to control the situation, apart from these three duty magistrates have also been kept in reserve. Many big farmer leaders of United Kisan Morcha are about to reach Hansi Gherao.

The farmers have given the time of siege at one o'clock, the preparation of the administration should stop the farmers away from the secretariat.

The farmers have given one o'clock time to gherao the SP office. All the farmers have been called to the Hansi secretariat at 10 am. On the other hand, the preparations of the administration are to stop the farmers away from the secretariat. For this, the Hansi administration has started berigating the secretariat at night itself. The administration has to keep the farmers away from the secretariat by making blockades towards Jind Road, Delhi Road and Hansi city. On the Narnaund controversy, farmer leader Rakesh Tikait said that only if the glass of the MP's car breaks, farmers are booked under eight sections. So far it has also been not clear whether the glass was broken by the police sticks or the farmers broke it. On the other hand, a young farmer has been brought to death by the MP, and the people accompanying him, in whom case has not been registered yet. This is a one-sided action by the administration which will not be tolerated at all.

The administration has come on the back foot twice before the strength of the farmers.

Several farmers were booked for an attempt to murder in a clash between farmers and police during the inauguration of Sanjeevani Hospital by Chief Minister Manohar Lal in Hisar before the Narnaund episode. Apart from this, a case of an attempt to murder was also registered against the farmers in the case of breaking the glass of the car of Deputy Speaker Ranbir Gangwa in Aryanagar Village. In both cases, these cases had to be cancelled after the gherao of the IG office by the farmers.