News viral on Social Media claims that the Indian government is going to deduct Rs 5000 from government salary employees. 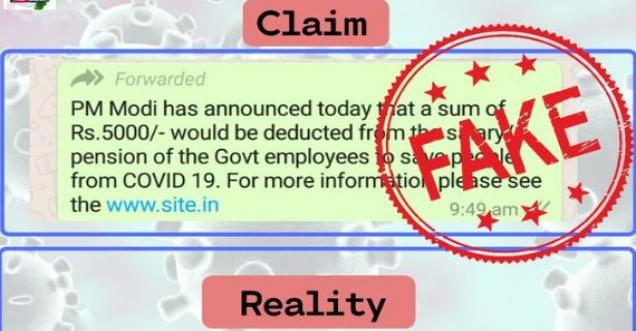 News Verification: The rumors of Coronavirus spreading on social media in an environment of panic are proving even more deadly. On one hand, there has been an outcry in the entire world including India on Coronavirus and on the other hand, there are many people who are forwarding messages on social media like WhatsApp, Facebook without checking the facts or cross-checking. News is becoming viral on social media that the Modi government has announced a cut in salary or pension of government employees.

This fake news is becoming quite viral on social media, claiming that Prime Minister Narendra Modi has announced that with the salary or pension of government employees, in order to save people from the coronavirus epidemic COVID-19, Five thousand (5000) rupees will be deducted from the government employees.

This fake news is being spread rapidly on WhatsApp and confusion is being created among the people.

The government fact-checking website reported to this fake news and said, No! Indian Government has NOT announced deduction in the salary/pension of Government employees. Beware of #Fake messages sweeping across social media on #Coronavirus. Let's stay home to #StopTheSpreadOfCorona; observe #21DaysLockdown and stop spread of #FakeNews!

No! Indian Government has NOT announced deduction in the salary/pension of Government employees.

Beware of #Fake messages sweeping across social media on #Coronavirus.

In fact, the information related to salary deduction on social media is completely fake and confirmed by PIB Fact Check. The truth of this fake news or message is that the government has not made any such announcement. Therefore, if you are also getting such messages, then you should not send it forward and whoever has sent you, by giving correct information, warn you not to send it further.

The market of rumors on Coronavirus on social media is also very hot. Therefore, you need to be vigilant so that any wrong and misleading news is avoided in this atmosphere of panic. So stay alert from fake news.