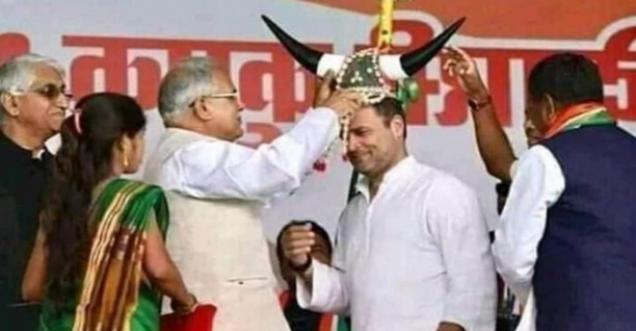 How NPR money goes in pocket of 15 friends of Modi, Rahul Gandhi explains

This is notebandi again: RahulGandhi addresses the media.

Remember how former Congress President, Rahul Gandhi used to rant about how demonetization helped Modi’s industrial friends and he has done it again. Rahul Gandhi while speaking to media, went on lamenting how the NPR will bring money to Modi’s 15 friends. He has yet again compared the demonetization to the NPR exercise.

The fear mongering by Congress and many other political parties has come again. Old habits never die, Rahul Gandhi has cited this 15 men before and doing it again, he cited them during the election rallies. Gandhi also took a swipe at PM Modi about the detention centres operational in Assam.

This is notebandi again: Shri @RahulGandhi addresses the media. pic.twitter.com/PNdPyiomCC

The idea of NPR was first floated by Congress, NPR was first done in 2010 by the Congress-led UPA government, later in 2015 under the BJP government it was linked with the Aadhar.  The NPR is a register of the usual residents of the country. It contains information collected at the local (village/sub-town), subdistrict, district, state and national level under provisions of the Citizenship Act, 1955 and the Citizenship (Registration of Citizens and Issue of National Identity Cards) Rules, 2003.

Demonetisation, on the other hand, is a cancellation of the legal tender status of a currency unit in circulation. Anticipating positive changes on the liquidity structure as a whole, nations often adopt the Demonetisation policy as a measure to counterbalance the current economic condition.

Rahul Gandhi, with his infinite wisdom, should show some light on the relation between the two and acquaint the lesser mortals as to why he conjoined the two separate exercises.

So the question is when Congress first floated the idea or NPR and implemented it back in 2010, did it make money. Did UPA-II make money of the NPR implementation in 2010? Where did the money go? Why didn’t Rahul Gandhi never raise his concern then?

Rahul Gandhi asserted that like during the demonetization, people had to get in line outside the ATMs and Banks to withdraw money bills, similarly, in NPR, people will be again forced to join the queue. However, Gandhi failed to mention why people would get in the queue.

While NPR only contains demographic information, more details are required for census like information on demography, economic activity, literacy and education, and housing and household amenities besides others.

The NPR activity is essentially a survey in which a government official comes at the residence of the inhabitants to seek mundane details about them. The NPR data is collected during the data collection for the census of India which takes place every 10 years. Where is the question of people leaving their houses and everyday essential work to join the queue? Were people asked to get in queue during NPR’s implementation in 2010 as well?

Congress party had claimed that the NPR will be used for religious profiling of the Muslims and the doubtful ones will be marked by the government officials who will later be stripped of their citizenship when the NCR kicks in.

The bone of contention has been about the inclusion of two new questions about the place and date of birth of the parents. However, the official document of the NPR says that those questions are optional and one can provide relative answers to those questions and not the exact details.

There is no provision in the NPR to seek details about the inhabitant’s faith. It is bewildering then to believe the claim made by the Congress party that the NPR will be a discriminatory exercise against the Muslims of the country. When details about Religion is not sought, how is the NPR going to be against Muslims?

The objective of the NPR is to create a comprehensive identity database of every usual resident in the country. The database would contain demographic particulars such as:

In the ongoing chaos, one of the less-known realities that have eluded a large section of the trigger-prone population is that all the detention centers that exist in India were built by Congress government. Assam currently has six detention camps. All have been set up inside jails in the Goalpara, Kokrajhar, Tezpur, Jorhat, Dibrugarh, and Silchar districts of Assam. Nityanand Rai, the Union minister of state for home affairs, informed the Rajya Sabha in November 2019 that a total of 1043 foreigners were housed in these detention centers in Assam. The first of these detention centers came up in 2008-09 in Assam, which was then under the Tarun Gogoi government.

India shares borders largely with Bangladesh and Myanmar. There are multiple infiltrations reported from the Pakistani side despite the overwhelming presence of Armed Forces along the border. In such a scenario, there are many illegal immigrants who manage to evade border authorities and sneak into India in the dead of night. What is Congress’ stand on the illegal immigrants in India who are a burden on the country’s economy, notwithstanding the security risk they pose? Should they all be made eligible for applying for Indian citizenship or should they be stratified into groups for their citizenship request consideration? Where should they be held, in jails or detention centers or they should not be held at all?

Large swathes of India are witnessing violence over the enactment of the Citizenship Amendment Act that intends to grant citizenship to persecuted minorities from the neighboring countries of Pakistan, Afghanistan and Bangladesh.

Protests have erupted after Congress along with other political parties stoked fear and insecurity among the Muslim citizens about their citizenship being at stake due to the legislation of the CAA.

Having lost innumerable elections to the BJP, especially the 2019 General elections, does the wilted Congress left with the only option of consolidating Muslim community to turn their electoral fortunes? Is Congress partaking in the process of burning the country to win over the Muslim community? Is Congress sacrificing the nation at the altar of regaining political prominence?

The Congress party has openly supported the calls for protests against the enactment of the Citizenship Amendment Act. It has gone to the extent of justifying the lumpen behavior of the anti-CAA riots to settle its political score with the BJP. It has resolutely stood behind the vandals and the rioters who are demanding revocation of the CAA. Rahul Gandhi should answer if the Congress party opposes the admittance of persecuted minorities from Pakistan, Afghanistan and Bangladesh to Indian citizenship?

Perhaps, the most important question that Rahul Gandhi should answer is if he knows the full form of the NPR and what it stands for? Is he aware of the differences between the NPR and the NRC? Does he know that the NRC and NPR are fundamentally two different exercises with altogether separate provisions?

Going by his irrational tirades in which he links the NPR to Demonetisation, it is all but difficult to believe that Rahul Gandhi is indeed aware of the basic specifics of the NPR. Recently, a Professional Congress member made a fool of herself when she spectacularly faltered in answer basic questions on NPR.

NPR is a population register of the usual residents of the country. Far from extracting money from the poor, it is aimed for optimal use of resources for the betterment and upliftment of the poor. Union Home Minister Amit Shah, in his recent interview with ANI, stated that the data from NPR helps the local government in better planning and allocation of resources as per the local demand. However, such nitty-gritty is lost on the Wayanad MP, whose only aim to slam the central government, without understanding the underlying logic behind the implementation of the NPR.