The US Commission on International Religious Freedom (USCIRF), the US body-tracking religious freedom around the world, has released its annual report for the year 2020. 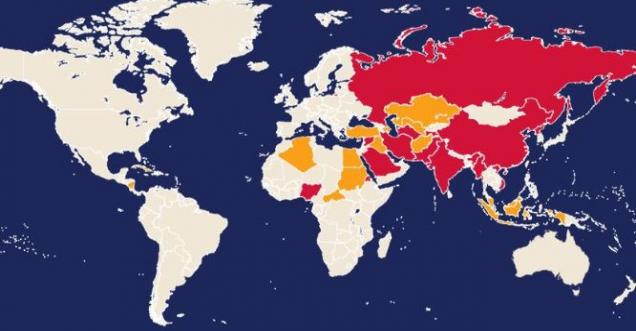 The US Commission on International Religious Freedom (USCIRF), the US body-tracking religious freedom around the world, has released its annual report for the year 2020.

In this report released on Tuesday, it has been suggested to keep India with 14 countries where there are 'some special concerns'. The report said that India is one of the countries where persecution of religious minorities is increasing.

The tweet from its official Twitter handle reads, " This is the first time since 2004 that USCIRF recommends #India as a Country of Particular Concern."

Below is the Full article of uscirf

Following the Bharatiya Janata Party’s (BJP) re-election in May, the national government used its strengthened parliamentary majority to institute national level policies violating religious freedom across India, especially for Muslims. The national government allowed violence against minorities and their houses of worship to continue with impunity, and also engaged in and tolerated hate speech and incitement to violence.

Significantly, the BJP-led government enacted the Citizenship (Amendment) Act (CAA)—a fast track to citizenship for non-Muslim migrants from Afghanistan, Bangladesh, and Pakistan already residing in India—and approved a National Population Register (NPR) as the first step toward a nation-wide National Register of Citizens (NRC). The border state of Assam, under the mandate of the Supreme Court, implemented a statewide NRC to identify illegal migrants within Assam. When the statewide NRC was released in August, 1.9 million residents—both Muslims and Hindus—were excluded. Those excluded live in fear of the consequences: three United Nations (UN) Special Reporters warned that exclusion from the NRC could result in “statelessness, deportation, or prolonged detention.” Indeed, Home Minister Amit Shah referred to migrants as “termites” to be eradicated. Troubled that Hindus were excluded from Assam’s NRC, he and other BJP officials advocated for the CAA as a corrective measure to protect Hindus. The CAA provides listed non-Muslim religious communities a path to restore their citizenship and avoid detention or deportation. In its wake, BJP leaders have continued to advocate for a nation-wide NRC; the citizenship of millions would be placed under question, but, with the CAA in place, Muslims alone would bear the indignities and consequences of potential statelessness.

The CAA’s passage in December sparked nationwide protests that police and government-aligned groups met with violence; in Uttar Pradesh (UP), the BJP chief minister Yogi Adityanath pledged “revenge” against anti-CAA protestors and stated they should be fed “bullets not biryani.” In December, close to 25 people died in attacks against protestors and universities in UP alone. According to reports, police action specifically targeted Muslims.

Throughout 2019, government action—including the CAA, continued enforcement of cow slaughter and anti-conversion laws, and the November Supreme Court ruling on the Babri Masjid site—created a culture of impunity for nationwide campaigns of harassment and violence against religious minorities. In August, the government also revoked the autonomy of Muslim-majority state Jammu and Kashmir and imposed restrictions that negatively impacted religious freedom. Mob lynchings of persons suspected of cow slaughter or consuming beef continued, with most attacks occurring within BJP-ruled states. Lynch mobs often took on overtly Hindu nationalist tones. In June, in Jharkand, a mob attacked a Muslim, Tabrez Ansari, forcing him to chant “Jai Shri Ram (Hail Lord Ram)” as they beat him to death. Police often arrest those attacked for cow slaughter or conversion activities rather than the perpetrators. Violence against Christians also increased, with at least 328 violent incidents, often under accusations of forced conversions. These attacks frequently targeted prayer services and led to the widespread shuttering or destruction of churches.

In 2018, the Supreme Court urged the central and state governments to combat lynchings with stricter laws. When, by July 2019, the central government and 10 states had failed to take appropriate action, the Supreme Court again directed them to do so. Rather than comply, Home Minister Shah called existing laws sufficient and denied lynchings had increased, while the Home Ministry instructed the National Crime Records Bureau to omit lynchings from the 2019 crime data report.

During 2019, discriminatory policies, inflammatory rhetoric, and tolerance for violence against minorities at the national, state, and local level increased the climate of fear among non-Hindu communities. After the reporting period, India continued on this negative trajectory. In February 2020, three days of violence erupted in Delhi with mobs attacking Muslim neighborhoods. There were reports of Delhi police, operating under the Home Ministry’s authority, failing to halt attacks and even directly participating in the violence. At least 50 people were killed.

RECOMMENDATIONS TO THE U.S. GOVERNMENT

Designate India as a “country of particular concern,” or CPC, for engaging in and tolerating systematic, ongoing, and egregious religious freedom violations, as defined by the International Religious Freedom Act (IRFA);

At the same time, India has rejected the claims of this report of USCIRF.

As per ANI, the Ministry of External Ministry said, “We reject the observations on India in the United States Commission on International Religious Freedom (USCIRF) Annual Report. Its biased & tendentious comments against India are not new. But on this occasion, its misrepresentation has reached new levels: Ministry of External Affairs”

We reject the observations on India in United States Commission on International Religious Freedom (USCIRF) Annual Report. Its biased & tendentious comments against India are not new. But on this occasion, its misrepresentation has reached new levels: Ministry of External Affairs

Apart from India, the countries which have been categorized as 'Countries with Particular Concern'. They are, "Burma, China, Eritrea, Iran, Nigeria, North Korea, Pakistan, Russia, Saudi Arabia, Syria, Tajikistan, Turkmenistan, and Vietnam."

In this report that religious freedom in India has been 'rapidly declining' and the oppression of religious minorities has increased. However, two of the nine members of the panel that issued the report opposed India being placed in the category of 'countries with particular concerns' (CPC). Another member also expressed a different view from the other members.

Commissioner Tenzin Dorjee said, "India is not in the category in which the authoritarian countries like China and North Korea are. India is the largest democratic country in the world. There, other parties including the opposition Congress Party, civil society, and many other groups have openly opposed the citizenship amendments bill and NRC. "