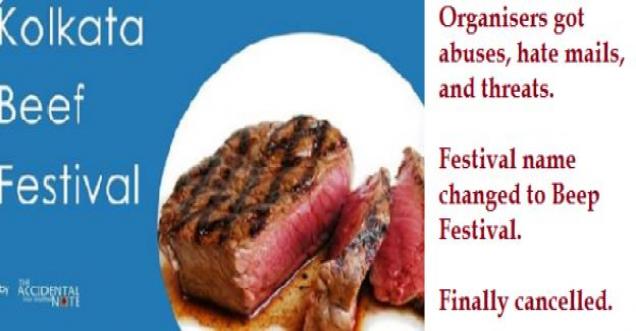 India: The ‘Kolkata Beef Festival’ which is now known as ‘Kolkata Beep Festival’ after protests on social media, was scheduled to be held at a café in the city on June 23 at a café at the city’s Sudder Street.

The Organizers of the ‘Kolkata Beef Festival’ canceled the event for the year 2019, supposed to be held on June 23, 2019. They said they received threat calls. The entry fee was Rs 200 and stalls were to be set up serving the dishes.

The organizers had said earlier: Our motive was to organize a food festival. Apart from beef delicacies we had planned to keep pork dishes in the event. If any one person is harmed, we would feel personally responsible, and we can not accept that.”

The organisers also said that the event was not political.
Arjun Kar, one of the organisers said, was aimed to celebrate good food. The festival with a wide variety of beef preparations ranging from Roasted beef chilli, black beef ribs, beef pikada, beef momo, beef burger, beef pizza, tenderloin, back ribs and Bolognese pasta to burgers are some of the things on our menu.

The organisers of the festival said it was aimed to celebrate good food . The entry fee was Rs 200 and stalls were to be set up serving the dishes. https://t.co/WoQeaHkuWH

Beef Festival in Kolkata changed its name to Beep Festival after getting hate mails. But the threat continued. Finally cancelled. pic.twitter.com/lFi5nWtKhJ