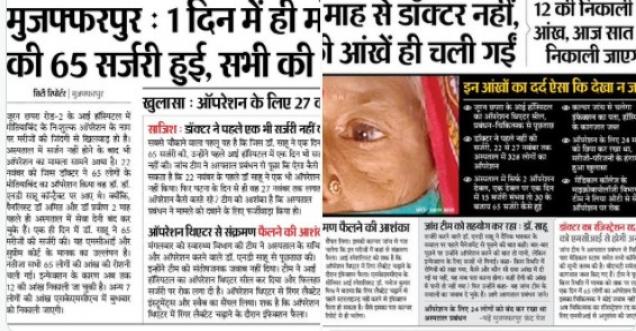 Bihar News: Last month in Muzaffarpur, Bihar, on November 22, 65 patients underwent cataract surgery in the hospital, out of which 27 people have serious eye infections. After the cataract operation, many people got serious eye infections, due to which 15 people have had to have their eyes removed so far. Civil surgeon Vinay Sharma has been directed to seal the operation theatre and close the entire hospital. The Civil Surgeon estimates that after the investigation of this case, the number of patients may increase further. He has indicated negligence during the operation.

People who have damaged eyes got cataracts operations done in Muzaffarpur Eye Hospital run by an institution. So far 15 patients' eyes have been removed due to infection. Three more patients have also been admitted, whose eyes will be removed. Apart from this, many patients are also getting their treatment in nearby private hospitals.

RJD leader and former Deputy Chief Minister of Bihar Tejashwi Yadav wrote in one of his tweets, "Look at the health system of the country's worst and laggy Bihar. In Muzaffarpur, 65 people's eyes were operated on, everyone operated on one table, far from seeing light, everyone's eyes had to be removed. The Chief Minister and the BJP Health Minister have nothing to do with the public.

The district department has asked for a list of all the patients who got operated on in the eye hospital. So that the eyes of other patients can also be examined. Regarding the whole matter, the Civil Surgeon said that the possibility of negligence in the operation has been seen in the investigation. The swab samples have been taken from the operation theatre of the hospital. District Magistrate Pranav Kumar said that after the investigation of the case, action will be taken against the culprits. An investigation team has been constituted under the leadership of the Civil Surgeon.

Earlier, after this case came to light, Civil Surgeon Vinay Kumar Sharma had said, "We came to know that people who have undergone cataract operations are suffering from severe infection in one eye. Doctors have now suggested the removal of the infected eye. A three-member committee has been constituted under the chairmanship of the blind control in charge. Prima facie, it appears that the doctors of the hospital did not follow the operation protocol." He said that we will take strict action against the hospital and doctors for such serious negligence.

Investigating officer ACMO said that 328 patients have been operated on in Eye Hospital in a week. Their well being will be taken by talking one by one on everyone's mobile number. If they face any kind of problem, they will be sent to SKMCH and treated. Meanwhile, during the operation on November 22 at Eye Hospital, people who have lost their eyesight or have eye problems? A special ward has been made in SKMCH for their treatment. There are 24 hours medical staff and doctors have been deputed. The superintendent of SKMCH, Dr BS Jha himself is monitoring this ward. So far, a total of 16 patients have been admitted to SKMCH

The team reached for investigation, got closed outdoor

An investigation team reached Muzaffarpur Eye Hospital on Wednesday. There a lock was found hanging in the outdoors. There was no doctor. There were definitely one or two patients who kept coming out without medical consultation. There was no one to see them. Some people also came who had operated two-three days ago. They were called for follow up. The Civil Surgeon said that the infection has spread among patients due to fungus or viruses in the operation theatre.

The National Human Rights Commission (NHRC) sent a notice to the Bihar government in this matter on Wednesday. In a statement, the NHRC said that it has taken suo motu cognizance of a media report that 'six patients had to undergo eye amputations' at the Sri Krishna Medical College and Hospital (SKMCH) after cataract surgery at the Muzaffarpur Eye Hospital on November 22. ‘The statement said that if the reports in the media are true, then this is a serious issue of violation of human rights.