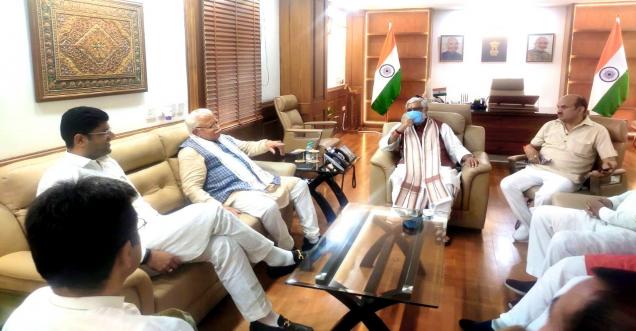 Chandigarh: The purchase of paddy and other Kharif crops in Haryana will start from Sunday. Chief Minister Manohar Lal Khattar announced this on Saturday. After his announcement, the United Kisan Morcha has withdrawn its decision to agitate against the government.

Haryana Chief Minister Manohar Lal Khattar said, 'The procurement of paddy will start from tomorrow. The decision in this regard has been taken after talks with the central government. The demand of the farmers has been fulfilled, so now there is no reason left for the agitation.

Union Agriculture Consumer Minister Ashwini Choubey said, 'The CM and MPs of the Haryana government had come to meet. From Sunday, the procurement of paddy and other Kharif crops will start in Haryana. Paddy procurement is already going on in Punjab. Now the farmers of both the states will not face any problem.

The procurement of paddy usually starts from October 1, but the central government issued an order on Thursday, directing to postpone this purchase in Punjab-Haryana till October 11. The government says that due to rain, the amount of moisture in the crop is still high. Farmers were enraged by this decision of the government and on Saturday protested at many places by protesting.

Plenty of politics on paddy throughout the day

There was a lot of politics on this issue on Saturday. Delhi Chief Minister Arvind Kejriwal urged the Center to start the purchase of paddy. At the same time, farmers in Punjab gathered outside the residences of several Congress MLAs. During this demonstration was held outside the house of Assembly Speaker Rana KP Singh in Rupnagar and MLA Harjot Kamal Moga.