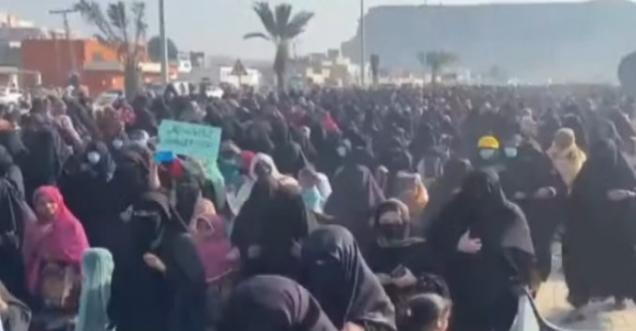 Pakistan: It has been 18 days with protesters demonstrating at the Gwadar port, but instead of listening to the demands of its citizens, Pakistan's Prime Minister Imran Khan has sent additional and police personnel to Gwadar.

The additional police force being sent comprises the Deputy Superintendent of police and station house officers. In addition to lower carder personnel, orders have been issued to send 5500 cops from various other districts on what Pakistan calls anti-right duties. The protests come amid simmering discontent over China's flagship project, CPC and unprecedented scenes a large number of women and children who have joined protests in the Port city of Gwadar.

China Pakistan's Economic Corridor is part of Xi Jinping's global Infrastructure Development strategy. The Belt in Road Initiative.  Over the past week, the resentment in the coastal town and the rest of Balochistan has boiled over with protests erupting in Gwadar. The protesters have numerous grievances with the ongoing Chinese project in the region. China's dear friend Imran Khan, a champion of the Chinese Belt and Road initiative, is turning a deaf ear to these protesters.

The Gwadar agitation, however, is not an isolated case.

China's Belt and Road Initiative, a key part of China's roadmap to expanding its global influence, of course, disquiet in several countries.

In February 2020, hundreds of protesters gathered in a KYRGYZ city to push back against the expanding Chinese influence.

In June 2019, locals cheered after a court-ordered to shelve the construction of a Chinese financed bottling plant in Siberia following public outcry.

The backlash against Chinese funded projects comes amid concerns over China's debt-trap diplomacy with several of China's partners saddled with debt, secret deals, unsustainable loans and unreasonable loan conditions. All have led to mounting debt for China's BRI partners.

But a country that fails to take action as prompt when it comes to terrorism neighbourhoods comes led PTI government of Pakistan seems to be choosing to kneel down to Chinese interests as against the concerns of its own citizens.