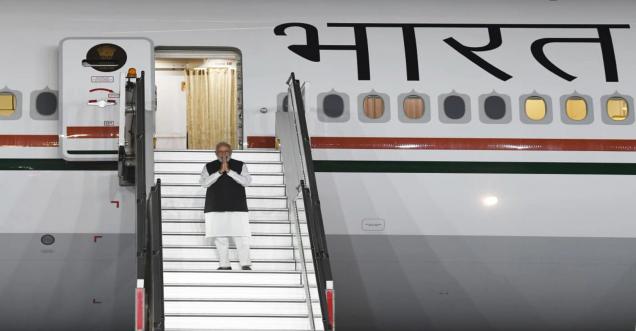 G-20 Summit 2021: Prime Minister Narendra Modi left for a five-day foreign visit from New Delhi late on Thursday night. First of all, he will reach Italy to attend the G-20 summit. This conference is being held in Italy. In this meeting, he will discuss many issues including pandemics, sustainable development and climate change with the leaders of the G20. PM Modi will be in Rome from 30-31 October and will participate in the 16th G-20 summit to be held there. PM Modi is reaching Italy at the invitation of Italian Prime Minister Mario Draghi. During this, there will be a meeting between the two leaders and talks are possible to further strengthen mutual relations. It is also possible to discuss preventing terrorism and promoting mutual trade during the meeting.

PM @narendramodi emplanes for Rome, where he will attend the @g20org Summit. pic.twitter.com/crYzkmUDWu

Before leaving, PM Modi said that I am going to participate in the 16th G-20 conference held in Rome. He said that apart from the pandemic and sustainable development, the benefits and harms of climate change can also be discussed with the G-20 leaders. The PM said that during the tour I will also visit Rome and Vatican City. He said that he would be in Glasgow from November 1 to 2 at the invitation of Prime Minister Boris Johnson.

These issues will be discussed in the G20

During the press conference, he said that India is dealing with the problem of climate change in a better way. During this, he told that India is doing better in reducing carbon emissions. The G20 forum is important for India for global economic reforms. He said that a special session would be organized on food security and nutrients.

During the next five days, the PM will participate in many multinational events and events, as well as several heads of state including Pope Francis, US President Joe Biden, Italy's PM Mauro Draghi, Britain's PM Boris Johnson, Australia's PM Scott Morrison in the Vatican. Will also hold bilateral meetings together.

India can also raise the issue of terrorism

Foreign Secretary Harsh Vardhan Shringla said on Thursday that India will take up issues related to cross-border terrorism, terror funding and terrorism-related activities with member countries at the G20 summit. He said that at present, terrorist funding and terrorism activities are having an impact on the world towards which India can attract the attention of global leaders.