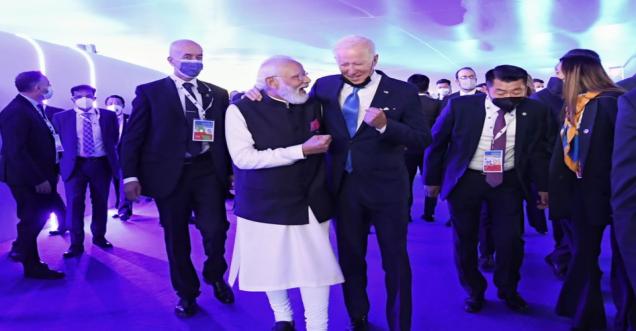 Statue of Kali Maa vandalized by Mob in Tripura, ABVP worker attacked
Some pictures of Prime Minister Narendra Modi's meeting with the Presidents of America and France have surfaced. In these pictures, PM Modi is seen interacting with Biden and Macron. In a picture, Joe Biden's hand is on PM Modi's shoulder. It is visible from seeing the picture that how good are the relations between the leaders of the two countries. Both are seen smiling and chatting. In another picture, Joe Biden and PM Modi are also seen shaking hands.

On the sidelines of the @g20org Rome Summit, PM @narendramodi interacts with various leaders. pic.twitter.com/7L3vbpRzUs


Saturday is the second day of Prime Minister Narendra Modi's visit to Italy. During this, the leaders of the G-20 countries met in Rome. The PMO said in a tweet, "On the sidelines of the G-20 Rome summit, PM Narendra Modi interacted with various leaders."


Earlier, on September 24, Joe Biden hosted PM Modi for the first time at the White House. Last month, PM Modi visited the US, where he met Vice President Kamala Harris, CEOs of several companies, besides Biden.
Earlier, all global leaders attending the G20 summit, including Modi, gathered for 'family photos'. In another tweet, the PMO said, "World leaders meet in Rome for the G-20 summit, an important multilateral forum of global interest."
PM Modi meets Pope Francis Earlier; Prime Minister Narendra Modi reached Vatican City on Saturday and met Pope Francis. During this, he talked on various issues including Covid, general global scenario and maintaining peace and stability. This was the first one-on-one meeting between Prime Minister Modi and the head of the Catholic Church, Pope Francis. This meeting of both was scheduled for only twenty minutes. But this meeting lasted for an hour. During this, PM Modi also invited the Pope to come to India. National Security Advisor Ajit Doval and External Affairs Minister S Jaishankar were also present with Modi at the Vatican.

At the Vatican City, PM @narendramodi had a meeting with Pope Francis. @Pontifex pic.twitter.com/o9OobfIBkL