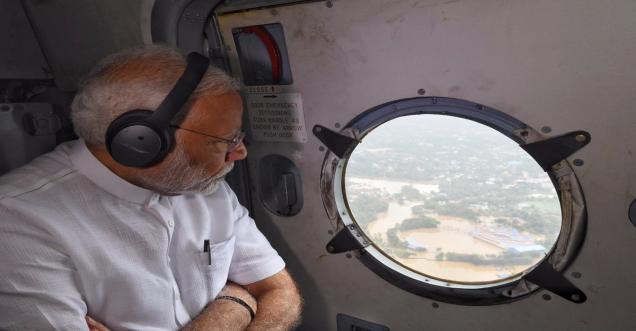 India, New Delhi: The Prime Minister visited Kerala to review the situation arising out of floods in the State. After a review meeting, he made an aerial assessment of the damages caused due to floods in some of the affected areas of the State, as permitted by weather conditions.  During the aerial survey, the Prime Minister was accompanied by the Governor, the Chief Minister, Shri K.J. Alphons (Union Minister of State) and officials.

The Prime Minister expressed his grief and sorrow on the unfortunate deaths and damage caused to lives and property due to floods.

The Prime Minister reviewed the flood situation during a meeting with Shri PinarayiVijayan, the Chief Minister of Kerala, and officials of the State Government.

After the review, the Prime Minister announced a financial assistance of Rs 500 crore to the State. This is in addition to Rs. 100 Cr. announced by the Home Minister on 12.08.2018.  He also assured the State Government that relief materials including foodgrains, medicines etc would be provided, as requested.

PM also announced ex-gratia of @ Rs. 2 lakh per person to the next kin of the deceased and @ Rs. 50,000 to those seriously injured from PM’s National Relief Funds (PMNRF).

PM has directed Insurance Companies to hold special camps for assessment & timely release of compensation to the affected families/beneficiaries under Social Security Schemes. The directions have also been issued for early clearance of claims under FasalBimaYojna to agriculturists.

PM has directed National Highways Authority of India (NHAI) to repair main national highways damaged due to floods on priority. The Central Public Sector like NTPC and PGCIL have also been directed to be available to render all possible assistance to the State Government in restoring power lines.

Villagers, whose kutcha houses have been destroyed in the devastating floods, would be provided Pradhan MantriAwasYojana-Gramin houses on priority irrespective of their priority in the Permanent Wait List of PMAY-G.

Under Mahatma Gandhi National Rural Employment Guarantee Scheme 5.5 Cr. person days have been sanctioned in the labour budget 2018-19. Any further request for incurring the person days would be considered as per the requirement projected by the State.

Under the Mission for Integrated Development of Horticulture, farmers would be provided assistance for replantation of damaged horticulture crops.

On the direction of the Prime Minister,  Shri KirenRijiju, MoS (Home) accompanied by the Shri K.J. Alphons, MoS (I/C), and a high-level Central Team visited the flood affected districts of Alappuzha and Kottayam on 21.07.2018, reviewed the flood situation, relief measures and met affected people.

On 12th August, 2018, Shri Rajnath Singh, Union Home Minister accompanied by Shri K.J. Alphons, MoS (I/C), Tourism and senior officers visited the flood/landslide affected areas of Kerala and carried out aerial survey of the affected areas and reviewed the search, rescue and relief measures taken by the State and Central Government agencies with CM, Kerala, and other Ministers and Officials. The Home Minister also announced release of Rs. 100 Cr. in advance from the NDRF.

An Inter-Ministerial Centre Team (IMCT) has already visited the affected areas in the State for assessment of losses from 7-12 August, 2018 as per the Memorandum dated 21.07.2018 submitted by the State Government.

57 Teams of NDRF involving about 1300 personnel and 435 Boats are deployed for search and rescue operations. Five (5) Companies of BSF, CISF and RAF’s have been deployed in the State to carry out rescue and relief measures.

The Army, Air Force, Navy and Coast Guard are also deployed for assisting the State in search & rescue operations. A total of 38 helicopters have been deployed for rescue and relief measures. In addition, 20 Aircraft are also being used for ferrying resources. Army has deployed 10 Columns and 10 Teams of Engineering Task Force (ETFs) involving around 790 trained personnel’s. Navy is providing 82 teams. The Coast Guard has provided 42 teams; 2 helicopters and 2 ships.

My thoughts are with the families of those who have lost their lives due to incessant flooding across Kerala. I hope the injured recover at the earliest.

We all pray for the safety and wellbeing of the people of Kerala. https://t.co/vLZ2GjazGH

Since 9th August, the NDRF, Army and Navy together have rescued /evacuated 6714 persons and provided medical assistance to 891 persons.

In Kerala, I took stock of the situation arising in the wake of the devastating floods across the state.

Joined a review meeting and undertook an aerial survey to assess the damage caused by flooding.

The nation stands firmly with Kerala in this hour. pic.twitter.com/PFeWTTZAwl

The Prime Minister complimented the State Government for the efforts made in meeting the challenges of the unprecedented situation. He observed that rescue of people who are still marooned remains the topmost priority. Government of India will continue to support the State Government in all its endeavours. 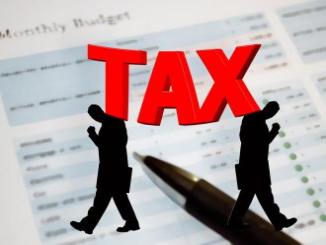