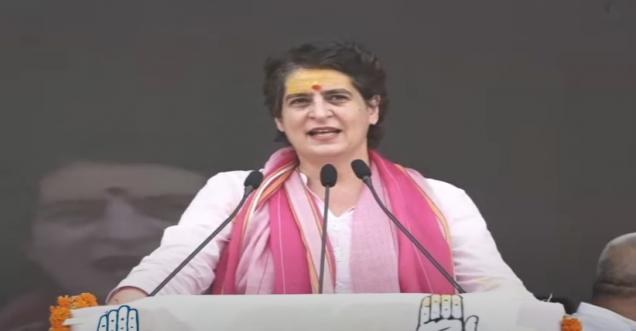 Varanasi: Congress General Secretary Priyanka Gandhi said, "The son of the Minister of State for Home of this country ruthlessly crushed 6 farmers under his car and all the families say that we want justice, not compensation. But the one who gives us justice is not visible in this government. The entire government was trying to save the minister's son." Priyanka Gandhi was addressing a Kisan Nyay rally in Varanasi.

Earlier, Priyanka had darshan and worship at Baba Vishwanath Temple and Maa Durga Temple here. Priyanka, who arrived for the Congress's 'Kisan Nyay Rally' organized in Rohaniya, Varanasi, first went to Baba Vishwanath temple and worshipped. After this, he reached Maa Durga temple and offered prayers. Priyanka was given a warm welcome by the workers at the Varanasi airport. Priyanka was received by State Congress Committee President Ajay Kumar Lallu and Legislature Party leader Aradhana Mishra.

Congress leaders and workers had put up huge hoardings of Priyanka on various routes of Varanasi. This is Priyanka's first public meeting in Uttar Pradesh after she was detained and in police custody for nearly two days while on her way to meet the families of the victims of the Lakhimpur Kheri violence case. Rahul Gandhi and Priyanka had met the families of the victims of the violence.

Eight people, including four farmers, were killed in the violence that broke out in the Tikonia area of ​​Lakhimpur Kheri district on October 3 against Deputy Chief Minister Keshav Prasad Maurya's visit to the native village of Union Minister of State for Home Ajay Mishra. A case has been registered against many people including Mishra's son Ashish in this case. Ashish Mishra is currently in police custody.