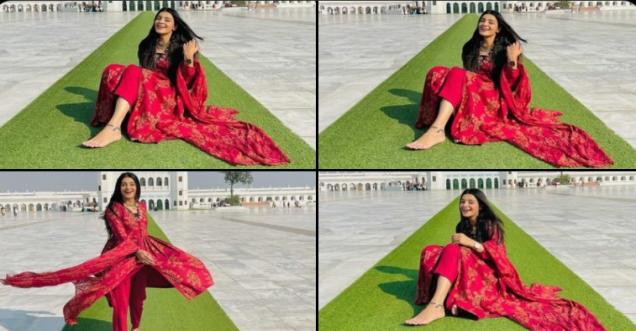 New Delhi: India has objected to the photoshoot of Pakistani model Sauleha Imtiaz at Sri Kartarpur Sahib Gurdwara in Pakistan. India on Tuesday summoned Pakistan's most senior diplomat to the country to express deep concern over the incident. Pakistan's fashion brand Mannat Clothing posted pictures of model Sauleha Imtiaz at Gurdwara Darbar Sahib Kartarpur on its social media platform. In this, the model was seen wearing a headless cloth, after which the clothing company and the model were heavily criticized.

Can she dare to do the same at her religious place in Pakistan?

Such behaviour & act at pious place of Sri Guru Nanak Dev Ji is totally unacceptable!
Can she dare to do the same at her religious place in Pakistan?@ImranKhanPTI @GovtofPakistan shd tk immed action to stop this trend of treating Sri Kartarpur Sahib as picnic spot by Pak people pic.twitter.com/AwyIkmqgbC

Modelling bareheaded for ladies' attire, in the premises of Gurdwara Sri Darbar Sahib at #KartarpurSahib in Pakistan, by a Lahorite woman, has several hurt the religious sentiments of Sikhs. Further the pictures were uploaded on social media.@ImranKhanPTI @MORAisbOfficial pic.twitter.com/i5RX01kWGo

Indian Foreign Ministry Spokesperson Arindam Bagchi said, "Charge d'affaires of Pakistan has been called today to express our serious concern over the incident of insulting the sanctity of Gurdwara Sri Darbar Sahib in Kartarpur by a model and a clothing brand from Pakistan. summoned. Arindam Bagchi said in a statement that India told the Pakistani official, "This condemnable incident has deeply hurt the sentiments of the Sikh community in India and around the world."

Our response to media queries on the incident of desecration of the sanctity of Gurudwara Shri Darbar Sahib in Pakistan: https://t.co/DhvUoxtpo0 pic.twitter.com/29afxbsKZ3

"Such frequent incidents of humiliation and disrespect to religious places of worship of minority communities in Pakistan highlight the lack of respect for the faith of these communities," the statement from the Ministry of External Affairs said. India has conveyed to the Pakistani diplomat that it expects an honest investigation into the matter and legal action against those involved.

The Pakistan Police has launched an investigation against a Pakistani model and apparel brand for hurting the religious sentiments of the Sikh community after a headless photoshoot for a brand of apparel was conducted at Gurdwara Darbar Sahib in Kartarpur. The police launched the investigation after an Indian Sikh journalist criticized the photographs. Let us tell you that keeping the head covered in the gurudwara is an important rule which both men and women follow.

Sauleha apologized and said that she did not intend to hurt anyone and the pictures were supposed to be a memory of her visit to Kartarpur Sahib.

" Recently I posted a picture on Instagram that was NOT EVEN A PART OF SHOOT OR ANYTHING. I just went to kartarpur to learn about the history and know about the sikh community. It wasnt done to hurt anyone sentiments or anything for that matter. However, if i have hurt anyone or they think that I dont respect there culture/religion. I am Sorry. And I just saw people taking pictures and i took a lot of sikh pictures too there. I wouldn’t have done it at the first place. I RESPECT THE SIKH CULTURE, RELIGION VERY MUCH AND I AM SORRY TO ALL THE SIKH COMMUNITY. 🤍

These pictures were just a part of a memory that i went there. Nothing more nothing less.

However, in future i will always be more clear about these things and refrain to do so such acts.