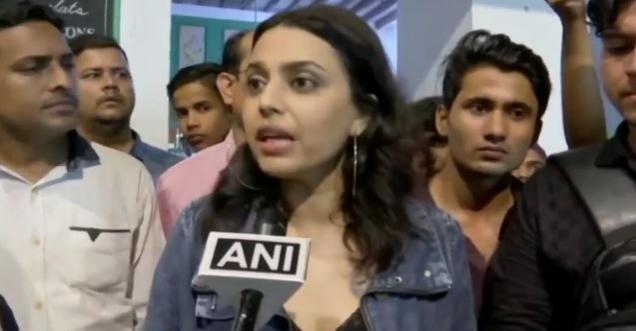 On Nov 5, Legal Rights Protection Forum filed a case against Swara Bhasker for calling a 4 years old actor child from South as Chu**ya.

Filed Complaint with NCPCR against an Actress named Swara Bhaskar for her racist & discriminating comments against Children of Southern Part of India during a TV Show.
Sought strict action against Actress & directions to Hotstar to remove content from all its Online accounts.

Filed Complaint with NCPCR against an Actress named Swara Bhaskar for her racist & discriminating comments against Children of Southern Part of India during a TV Show.

Sought strict action against Actress & directions to Hotstar to remove content from all its Online accounts.

Below is the video

This is ‘humour’? Calling a 4 year old child a ‘Ch*^%a’ a ‘Kameena’? Saying with great confidence that children are ‘evil’? #PanautiJunior is sounding completely deranged here, and that moron @kunalkamra88 is watching like a drunk dodo at this ‘wisdom’. pic.twitter.com/wM7f401tkm

Swara Bhasker said she does not have birth Certificate and no property by his Ancestors, can you believe

Swara Bhaskar is an Indian actress who works in the Hindi film industry. Best known for her supporting work in mainstream productions and starring roles in independent films, she has won two Screen Awards and has been nominated Filmfare Award on three occasions.

Bhaskar, the daughter of naval officer Commodore Chitrapu Uday Bhaskar (Retd.), was born and raised in Delhi. After receiving her bachelor's degree in English literature from the University of Delhi, she enrolled herself at the Jawaharlal Nehru University to complete her master's in Sociology. Bhaskar made her film debut with a supporting role in the 2009 drama Madholal Keep Walking, a commercial failure. She achieved wider recognition for her supporting role of a bride-to-be in the commercially successful romantic comedy Tanu Weds Manu (2011). Her performance in the film was well received by critics and she garnered a Filmfare Award for Best Supporting Actress nomination.

Can you believe the below statement

Swara Bhaskar, one of the key left-wing freelance protestors and against CAA, put the blame on the Uttar Pradesh police for their alleged excess against the rioters and went on to make a mindless rant by claiming that UP police was up for “revenge” against the rioters. The smile on her face says all. Can these Leftist hand the magic wand, to restore order, without resorting to retaliation, in the face of a stones being hurled, buses being burnt by the mob?

And then says that retaliating to a murderous mob is a 'revenge', which Police must not resort to!

To make an instant donation to ayupp.com, click on the "Donate Now" button above.
Tags Swara Bhaskar