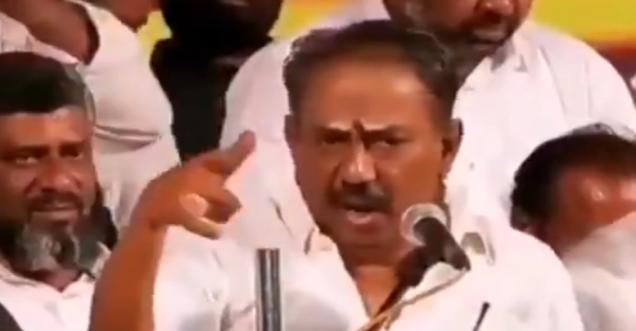 Tamil scholar Nellai Kannan calls for murder of Amit Shah during SDPI rally, says no Muslim is doing it

Tamil scholar Nellai Kannan, who openly says something should happen during the CAA protest, but no Muslim is doing so.

India: How low Intolerance can reach, this is visible from a Tamil scholar Nellai Kannan, who openly says something should happen during the CAA protest, but no Muslim is doing so. A horrible case of inciting a certain part of the community against the Home Minister of India, Amit Shah.

The Tamil scholar Nellai, on Monday, called for the murder of Home Minister Amit Shah. In a meeting organised by the Social Democratic Party of India (SDPI) to protest against the Citizenship Amendment Act (CAA), He went ahead to say Amit Shah as the brain behind the PM Modi and that if his story was 'finished', that of the PM would also be over.

BJP spokesperson Narayanan Thirupathy has filed a complaint against Kannan claiming that the speech was inciting hatred and urged the police to file a case against abetment to murder. Tamil Nadu BJP, also said that strong action be taken against Kannan. "Nellai Kannan who is seen as Congressperson in public perception instigates violence against our Hon Home minister.

The incitement comes against the backdrop when the whole nation is in a frenzy mood against the CAA and slowly understanding that the CAA is for all and not against the Minority Muslim community in India.