It has not been a common standard for big brands like the Wall Street Journal to create a double standard in news reporting and create a total biased reporting for Indian media and against a particular religion the Hindu religion. 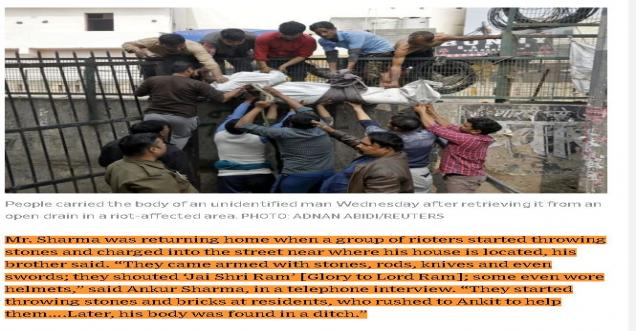 It has not been a common standard for big brands like the Wall Street Journal to create a double standard in news reporting and create a total biased reporting for Indian media and against a particular religion the Hindu religion. It has been quite known to write articles against the People of India and more importantly against a particular religion the Hindu religion even in the death of Ankur Sharma, the news media played a death card of the death to get some extra page views.

Wall Street Journal gave complete wrong information that Ankur Sharma, the brother of the deceased IB officer allegedly said to them that the rioters had come armed with stones, rods, knives, and even swords, and shouted slogans ‘Jai Shri Ram’ before attacking his brother Ankit Sharma.

As per the current news media and videos available there is not a single video where his murdered IB official Ankit Sharma’s brother has ever said for a single time that the crowd chant Jai Sri Ram. Instead, the brother of the murdered IB official directly said that” 40-50 people associated with AAP leader Tahir Hussain took his brother and had murdered him. “They killed my brother and four-five others and threw them in the drain. They have recovered three more bodies from the drain. Tahir Hussain is behind the incident”.

HERE IS BROTHER OF ANKIT SHARAM ON INDIAN TV SAYING EXACT OPPOSITE. THAT TAHIR HUSSAIN GOONS KILLED HIS BROTHER.

Gruesome murder of IB official #AnkitSharma
His brother tells:"40-50 people took him & five others to AAP leader #TahirHussain 's house & murdered them all! "
Then threw their bodies in the drain
Hand & feet were cut
Spine Chilling
Hindus r being massacred & world is quiet! pic.twitter.com/YoYyjlnOzj

Horrible news reporting on Ankit’s death the WSJ writes, “Mr. Sharma was returning home when a group of rioters started throwing stones and charged into the street near where his house is located, his brother said. “They came armed with stones, rods, knives and even swords; they shouted ‘Jai Shri Ram’ [Glory to Lord Ram]; some even wore helmets,” said Ankur Sharma, in a telephone interview. “They started throwing stones and bricks at residents, who rushed to Ankit to help them….Later, his body was found in a ditch.”, clearly the intention of the newspaper is not good.” 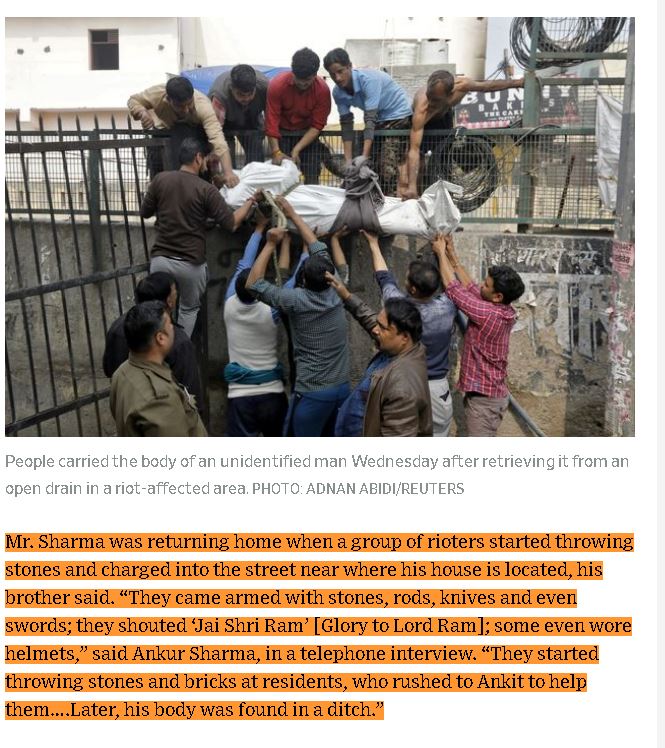 Several people posted videos of the unfortunate day incident that happened around the Muslim cooperator house, however, WSJ ignored all the news.

+ This is a video shared by a local resident. The house on the left belongs to Hussain. One can see mob on its rooftop throwing stones and petrol bombs all over pic.twitter.com/9uDBEZBXOn