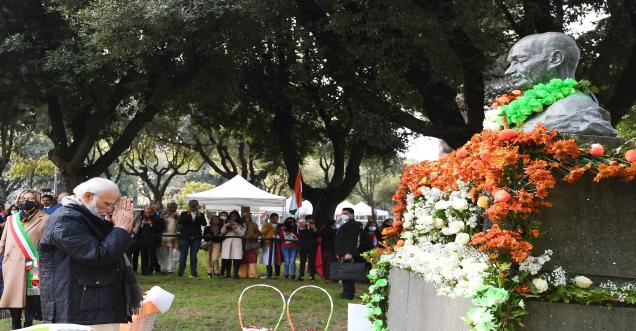 Prime Minister Narendra Modi has reached Italy to participate in the G-20 Summit. PM Modi is on a five-day foreign visit, for which he left late at night. PM Modi will also visit Glasgow in Scotland. He will discuss recovery from the pandemic, the global economy and climate change with other G-20 leaders at the G-20 summit held in Italy.

The Indian community extends a warm welcome to PM @narendramodi in Rome. pic.twitter.com/L3RjqagBlp

Prime Minister Narendra Modi will discuss the global economic and health recovery from the Corona pandemic, in Rome. While in Glasgow, he will talk about the need to address the challenges of climate change comprehensively, along with equitable distribution of carbon space.

#WATCH | PM Narendra Modi arrives in Rome, Italy. He will participate in the 16th G-20 Summit here from October 30-31 at the invitation of Italian Prime Minister Mario Draghi.

The PM will also hold a meeting with Italian PM Mario Draghi. pic.twitter.com/uq1rRC8e9Y

This is the first G-20 conference after the Corona era in which the world's big leaders will face to face. The Prime Minister started his visit early on Friday and he informed about it by tweeting a picture. He said he would also meet Pope Francis in Vatican City. Also, apart from the summit, he will also meet leaders of other allied countries and discuss India's bilateral relations with them.

After Rome, leave for Glasgow, for the G20 summit on 31 October,

Modi will leave for Glasgow to attend the 26th Conference of the Parties to the United Nations Framework Convention on Climate Change (UNFCCC) (COP-26). The G20 is a forum of some of the most powerful countries in the world. On this, PM Modi will tell about India's best work on climate change and clean energy expansion. Modi said that in COP-26, he will meet leaders of all stakeholder countries and inter-governmental organizations, which will increase the possibilities of development.

The ideals of the great Bapu reverberate globally.

Official engagements in Rome begin with a productive interaction with @eucopresident Charles Michel and @vonderleyen, President of the @EU_Commission.

The leaders discussed ways to enhance economic as well as people-to-people linkages aimed at creating a better planet. pic.twitter.com/Uvk4JLN5Ca

The PM is in Rome to participate in the G20 Summit. pic.twitter.com/G13ptYOAjB

Rome | Members of the Indian community gathered at Piazza Gandhi give a warm welcome to PM Narendra Modi pic.twitter.com/G51TkL8NPz

Italy | Prime Minister Narendra Modi interacts with the members of the Indian community gathered at Piazza Gandhi in Rome pic.twitter.com/JLUXJag6eF