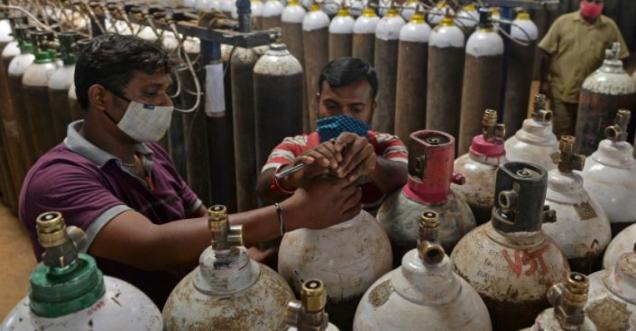 During the second wave of corona in India, there is a huge crisis of oxygen.  The second wave of novel coronavirus is impacting more life. Lung infection and pulmonary get damage in only two days, whereas in the first wave it affects lung function in five days.

In a country like India there is no problem with oxygen, we have it in sufficient quantity, but the problem is oxygen transportation requirements, which the Indian government is not able to do.

So, as we see our demand is not more but due to the lack of transportation system, we are facing crises. So the question arises why is the Oxygen crisis in India. Lets us understand below.

Turning oxygen into liquid: We keep Oxygen in liquid form and to transform oxygen into liquid form it is kept at very cold temperature. For example, when we exhale air in winter the air turns into vapor the same way when we cool oxygen it changes into a liquid. Basically, oxygen needs -185°C to become liquid. Also, it can’t be transferred by the normal liquid gas containers. It needs a special type of container named ‘Cryogenic container’, which is kept under -185°C. Tata company has imported many cryogenic containers.

Germany has sent an Oxygen Plant with the capacity of generating 4,00,000 litres of oxygen.

The shortage of oxygen cylinders is another important reason for the crises. As many people are storing and keeping cylinders for future oxygen crises. Now the price of these cylinders has increased rapidly. Where the original price of the cylinder is 600 to 700 now in the black market you can get at 6000 to 7000.

Kerala has the distinction of being the only State with an oxygen surplus, so much so, that it has been sending supplies to Tamil Nadu, Goa and Karnataka as well. The State’s oxygen production is at 199 metric tonnes per day.

Kerala is the first state where covid 19 was found, now the state has become the oxygen surplus state. This all possible through concerted efforts to set up oxygen plants and maintain the existing ASU.

Early release of technical guidelines on contact tracing, quarantine, isolation, hospitalization, infection prevention and control, and extensive capacity-building for all cadres of health and other interlinked departments played a critical role in managing the situation.

Air is a mixture of different gases. The air in Earth's atmosphere is made up of approximately 78 percent nitrogen and 21 percent oxygen. So, when we breathe, we take only 21 % oxygen. For healthy people, 21% of oxygen is enough for breathing but Covid-19 in severe cases reduces the capacity of the lungs to absorb oxygen naturally available during respiration.

A normal level of oxygen is usually 94% or higher. Blood oxygen (SpO2) levels above 94 are considered good. Readings between 91-94 should be monitored. However, a person should seek help if oxygen levels fall or consistently linger below the 91 marks.

Proning covid treatment: Proning is advised to the patient having low oxygen. Proning a medically approved position. These oxygen covid patients, who are in dire need of Oxygen are made to lie on their abdomen to boost their oxygen levels. In proning position One pillow is to be placed below the neck, 1-2 pillows below the chest through upper thighs, and 2 pillows below the shins. A patient should lie on their belly, right, and left sides alternately. Oxygen levels can improve from 75 to 94 after sleeping in a prone position.

covid 19 vaccine doses needed by India in a alarming rate, India need13 crore doses of the Covid-19 vaccine every month to teach the target of vaccination, which is possible when America lift a ban on the export of vaccine. While Russia always helped India. Russia sends oxygen concentrators, ventilators and 22 tonnes of medical supplies to India to help fight Covid-19 and save lives.

The Ahmedabad-based pharmaceutical giant Zydus Cadila announced that its drug Virafin had received restricted, emergency use approval from the Drug Controller General of India (DCGI).

According to the company’s registration on the Clinical Trial Registry of India, Virafin’s phase 2 clinical trial was conducted with 40 participants, and phase 3, with 250 patients. The company’s press release also suggests that the approval was granted based on data from both trials.

Virafin has been indicated for use in patients with moderate COVID-19, whose oxygen saturation is in the range 94-90%. Given the number of cases currently active in India, and the fraction of them that have the only moderate disease.

Currently, a lot has been told on many news channels regarding Nasitrol nasal spray. According to the company, by repeatedly injecting this medicine into the nose, the risk of the corona is reduced by 99%. The pharmaceutical company believes that Sanotize Nitric Oxide Nasal Spray has proven to be effective at the time of covid research. This drug has not yet been introduced in the Indian market.  Israel and New Zealand give interim approval for the sale of virus nasal spray.

It is expected that this drug will be introduced in India's local market soon after the approval of the government.

Now Israel and New Zealand are the two countries where no corona cases records. In India complete lockdown is the only solution to break the chain of the corona.

To make an instant donation to ayupp.com, click on the "Donate Now" button above.
Tags oxygen crisis India