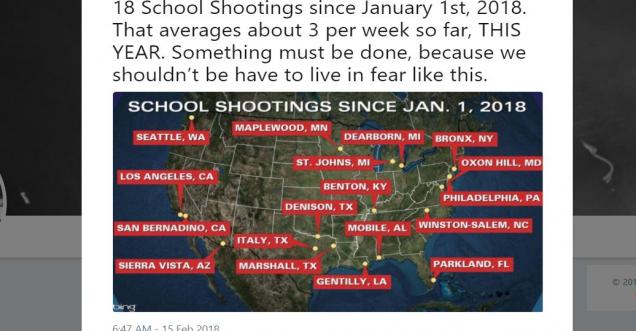 Viral Message: 18 School Shootings since January 1st, 2018. That averages about 3 per week so far, THIS YEAR. Something must be done, because we shouldn’t be have to live in fear like this.

18 School Shootings since January 1st, 2018. That averages about 3 per week so far, THIS YEAR. Something must be done, because we shouldn’t be have to live in fear like this.

18 School Shootings since January 1st, 2018. That averages about 3 per week so far, THIS YEAR. Something must be done, because we shouldn’t be have to live in fear like this. pic.twitter.com/1uTxLwXJbV

Viral Message Verification:-  The news about the number of attacks in Amrican schools since January have come up, there has been more than 18 School Shootings since January 1st, 2018.

Well the number can be said to be true but it is not related to shooting in all the case.

We did a cross check and tried to find out the list of all the incidents happened around the American schools, from firearms and bullying, since the start of January 1st, 2018. We are showing all the news information that came in the media.

Shots were fired and a bullet entered a building at New Start High School near Burien Thursday afternoon.

King County Sheriff's Office officials said no one was hit or injured. Officials said a round was fired from outside of the school around 1:15 p.m. into the main administrative office. The office was occupied at the time.

Vice President of Business Services Giles Brown said a criminal justice club advisor was showing two students how to use a computerized firearms simulator before the incident occurred.

He said the instructor took his live weapon and put it in a box so it would not be confused with the training weapon.

Authorities say a gun was fired and a bullet hit a building on a Southern California college campus, but there were no reports of any injuries.

And this: https://t.co/0TMPJqC1vc (no injuries, shooter never found)

A Winston-Salem State University football player died after being shot at an event at Wake Forest University early Saturday morning.

A 15-year-old girl who was wounded in the Italy High School shooting is "in good spirits," and the 16-year-old boy suspected of opening fire in the cafeteria has been charged as a juvenile with aggravated assault, officials said Tuesday.

Police said someone in a dark pickup truck drove by The NET Charter High School, in the 6600 block of Franklin Avenue, and fired while a group of students were in front of the school, in the parking lot.

The news said “Two students were killed Tuesday and 18 other people were wounded when a 15-year-old boy armed with a handgun opened fire inside a Kentucky high school, authorities said.”

As a #Kentuckian, it is so hard to read and watch videos about the recent school shooting in #MarshallCounty #harshergunlaws #moreprecautions #MarshallStrong

According to officials, the Neal was involved in an altercation with another 16-year-old male. At approximately 11:20 a.m., Neal pointed the gun at the other student and administrators before running outside and firing the rounds of bullets into the air, police officials say.

Someone fired shots from a car Friday night in the Dearborn High School parking lot during a basketball game, but nobody was injured, according to the school district.

13: Lincoln, High School, Philadelphia, PA – Fight between two adults just so happened to take place in HS parking lot, man dies as a result of wounds sustained by gunshots. Pennsylvania has some of the strictest gun control laws in America. (https://t.co/r8rSWKx9ZH)

A semi-automatic rifle brought to school by a 12-year-old student accidentally went off. Four students were injured.

Two teens have been charged with attempted murder in the shooting of an Oxon Hill High School student Monday afternoon.

Prince George’s County police said 17-year-old Zanaya Bryant and 18-year-old Anthony Hollingsworth, both of Clinton, Maryland, are being charged as adults in the shooting.

The victim is a 17-year-old 11th-grade student at the school.

February 5th: a 17 and 18-year-old, shot (in an attempted robbery) a junior at Oxon Hill High School. Both were arrested and the student, which was taken to the hospital, has recovered. It took place in a parking lot, after school hours.https://t.co/vGQv1JRiIn (17/)

Nobody was injured Monday afternoon when a student at the Harmony Learning Center fired a school liaison officer’s gun, Maplewood police say.

The officer was sitting on a bench talking with some students about 1:45 p.m., when a third-grader pressed the trigger of the officer’s holstered weapon, according to a news release issued by the Maplewood Police Department.

A three year old who pulled the trigger on a police officers gun in school . https://t.co/bV4mKrqmiS

It happened Metropolitan High School in the Longwood section around 3 p.m.

Police responded to the call at 3:20 p.m. They found a bullet hole in the floor of a classroom inside the school.

A 17-year-old is in custody, officials said. He is being questioned at the 41st Precinct.

According to the Cochise County Sheriff’s, the 14-year-old was found dead at the school Tuesday from what appears to be a self-inflicted gunshot wound.

Police said two people in a black sedan appeared to have exchanged gunfire with a person in the dorm's parking lot before speeding off and hitting a retaining wall in the parking lot.

At least 17 people were killed and 14 were injured and taken to local hospitals, officials said.

A sheriff said the bodies of 12 of the dead, including a beloved coach and security guard, Aaron Feis, who stepped in front of one spray of bullets to protect his students, were found inside the building.

We agree with the sense or the message the person we tweeted this message wanted to convey.