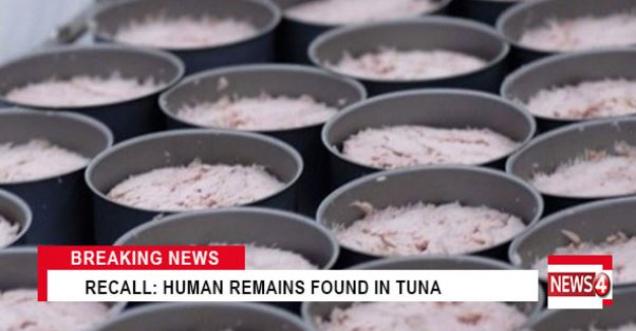 Brief Outline: Love It, Massive Bumble Bee Recall After 2 Employees Admit Cooking A Man And Mixing Him With A Batch Of Tuna is old fake news.

Origin: The original news was spread by lovethispic, when it published the news on first on November 1 2016, titled Massive Bumble Bee Recall after 2 Employees Admit Cooking a Man and Mixing Him with a Batch of Tuna (archive link).

Viral Example: We previously reported about the current tuna recall and the reason for the recall was supposedly a packing deviation by a facility not owned or operated by Bumble Bee that could result in contamination by spoilage or pathogens – if consumed this could lead to life-threatening illnesses… Now there are new reports a man was mixed into a batch of tuna! These have been new reports circulating today so we cannot verify them at this time, but here's what sites have been reporting:

Bumble Bee Foods and 2 employees were charged by Los Angeles prosecutors with violating safety regulations in the death of a worker who was cooked in an industrial oven with tons of tuna. José Melena was performing maintenance in a 35 foot long oven at the company’s Santa Fe Springs plant when coworkers loaded it with 12,000 pounds of canned tuna and turned it on. Temperatures reached 270° during a two-hour process to cook and sterilize the tuna. The body of Melena,62, was found when the oven was opened.

Detailed Analysis:  Though this new is old, It was published first on November 1 2016 by Timfly yet it is now gaining a good hit on the social media sites recently. This news has been shared by more than 141901 people on the social media websites like facebook and continuous to gain more attraction.

So did the Bumble Bee company recall cans of tuna fish after two employees cooked and mixed a man with the tuna? No not really.

However in march 2016, SAN DIEGO – Bumble Bee Foods, LLC announced that it is voluntarily recalling 3 specific UPC codes of canned Chunk Light tuna due to process deviations that occurred in a co-pack facility not owned or operated by Bumble Bee.

There was a incident when a 62-year-old father of six needed to make a quick repair inside the massive industrial pressure cooker, which is used to sterilize thousands of cans of tuna at a time. Not realizing Melena was inside, fellow employees shut the machine door behind him on that day in October 2012 and turned the oven on. With temperatures reaching about 270 degrees, Melena was cooked to death.

So no tuna was ever sold that contained bits of a dead worker. So it is a hoax message being spread again.

SAN DIEGO - Bumble Bee Foods, LLC announced today that it is voluntarily recalling 3 specific UPC codes of canned Chunk Light tuna due to process deviations that occurred in a co-pack facility not owned or operated by Bumble Bee.