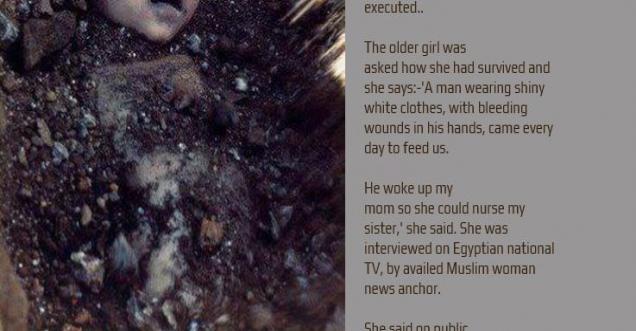 Viral Message: A Muslim man in Egypt killed his wife because she was reading the Bible and then buried her with their infant baby and an 8 year old daughter.

Viral message example-   A Muslim man in Egypt killed his wife because she was reading the Bible and then buried her with their infant baby and an 8 year old daughter. The girls were buried alive! then He reported to the police that an uncle killed the kids. 15 days later, another family member died.

When they went to bury him, they found the 2 little girls under the sand - ALIVE! The country is outraged over the incident, and the man will be executed.The older girl was asked how she had survived and she says 'A man wearing shiny clothes, with bleeding wounds in his hands, came every day to feed us. He woke up my mom so she could nurse my sister,' she said. She was interviewed on Egyptian National TV, by availed Muslim woman news anchor. She said on public TV,

'This was none other than JESUS, because nobody else does things like this!', Muslims believe Isa (JESUS) would do this, but the wounds mean He really was crucified, and it's clear also that He is alive! But, it's also clear that the child could not make up a story like this, and there is no way these children could have survived without a true miracle.

Muslim leaders are going to have a hard time to figure out what to do with this, and the popularity of the Passion movie doesn't help! With Egypt at the centre of the media and education in the Middle East , you can be sure this story will spread.Christ is still turning the world upside down! Please let this story be shared. The Lord says, 'I will bless the person who puts his trust in me.' Jeremiah 17.. Please forward this to all on your list and GOD will reward you abundantly!!!!!!!!!!! Please finish reading before you do anything else right now.

Read this to the end. My name is God. I know you will give your time for me. I love you and always bless you. I am always with you. I need you to spend 30 minutes of your time with me today. Don't pray. Just praise. Today I want this message across the world before midnight. Will you help? Please do not cut it and I'll help you with something that you are in need of. Just dare me and think of one thing that u need from me and TYPE Amen in the comment box below....

This is very old news in circulation as somewhere from April 2004. If you read the story carefully you can analyze there is no truth in the message.

There is No Evidence That the Story Really Happened. Several wrong points can be found out from this viral spam message