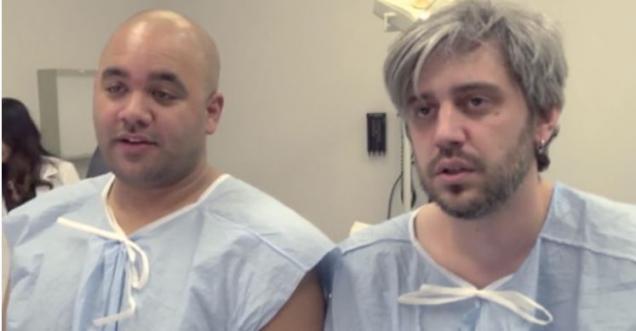 Brief Outline: The message A San Francisco couple was hospitalized for an excruciating 16 hours this week at San Francisco’s General Hospital after mistaking an industrial adhesive with sexual lubricant.

A San Francisco couple was hospitalized for an excruciating 16 hours this week at San Francisco’s General Hospital after mistaking an industrial adhesive with sexual lubricant.

Matthew Kensworth, 39, and Jamie Loon, 37, called emergency services after realizing they were literally glued together and were unable to detach themselves from one another.

One of their friends allegedly filled a bottle of lubricant with a strong adhesive as a prank but eventually felt horrible when he learned about the 16-hour-long hospitalization that later occurred.

The two men used in the picture for this satire website are actually trying to have labor pain experience with the help of labor pain simulators.

As published in a site romper These Men Tried Labor Pain Simulators To Prove Women Wrong & Failed. As mentioned in the website, It's not clear from the video how long these men experienced labor pains, but early labor can last for approximately eight to 12 hours and active labor can last an additional three to five hours, according to the American Pregnancy Association. So it's safe to say, these guys got off easy.

It's an age-old question: Is giving birth really more painful than when men get hit in the you-know-what? As it unsurprisingly turns out, yes. Yes, it is. And this became even more clear after these men tried labor pain simulators to prove women wron...

The website World News Daily Report is a well known satire website specialized in posting hoaxes and made up stories. The disclaimer on their website is pretty clear about that even though you have to scroll all the way down the page to find it:

World News Daily Report assumes all responsibility for the satirical nature of its articles and for the fictional nature of their content. All characters appearing in the articles in this website - even those based on real people - are entirely fictional and any resemblance between them and any person, living, dead or undead, is purely a miracle.