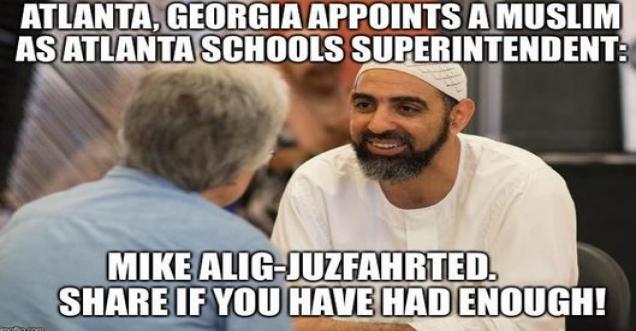 Origin: The news is widely popular on the social media sites.

Detailed Analysis: The image with a text on it was posted on 23rd May, 2018 by the facebook page of America's Last Line Of Defense titled as ENOUGH IS ENOUGH!!!!.

The men shown in the picture is Mohamed Bakr and not Mike Alig-Juzfahrted. Read more on Mohamed Bakr at a news published by kuow.org below.

The current superintendent of Atlanta Public Schools is Meria Joel Carstarphen. Dr. Carstarphen has nearly 20 years of education and experience in diverse, major metropolitan public school districts, including Austin, Texas; Saint Paul, Minn.; and the District of Columbia. In Atlanta, she leads the district’s 50,000 students, 6,300 employees and 98 learning sites and oversees the system’s $1 billion annual budget.

The about us of the America's Last Line Of Defense states that About
Nothing on this page is real. It is a collection of the satirical whimsies of liberal trolls masquerading as conservatives. You have been warned.

Impressum
Use the force and the truth shall reveal itself. Just not here. Ever.

Products
Good Old Fashioned Liberal Troll Provided Fantasy presented as comedy to the left and a social experiment to the right. Please don't hurt the Trumpanzees. they'll be gone in a few years back to the shadows from whence they came and we'll be back to trolling Tea Turds.

Think twice before sharing a news story from the America's Last Line Of Defense.