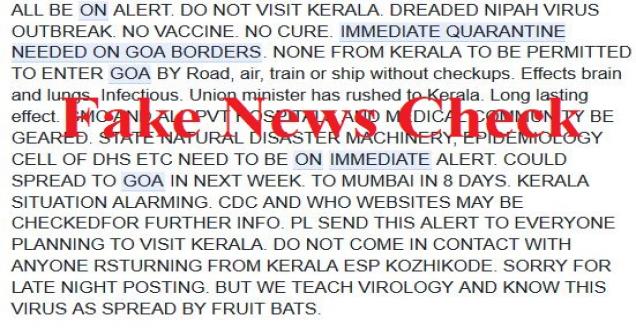 Origin: The news is widely popular on the social media sites.

Viral Example:   ALL BE ON ALERT. DO NOT VISIT KERALA. DREADED NIPAH VIRUS OUTBREAK. NO VACCINE. NO CURE. IMMEDIATE QUARANTINE NEEDED ON GOA BORDERS. NONE FROM KERALA TO BE PERMITTED TO ENTER GOA BY Road, air, train or ship without checkups. Effects brain and lungs. Infectious. Union minister has rushed to Kerala. Long lasting effect. GMC AND ALL PVT HOSPITALS AND MEDICAL COMMUNITY BE GEARED. STATE NATURAL DISASTER MACHINERY, EPIDEMIOLOGY CELL OF DHS ETC NEED TO BE ON IMMEDIATE ALERT. COULD SPREAD TO GOA IN NEXT WEEK. TO MUMBAI IN 8 DAYS. KERALA SITUATION ALARMING. CDC AND WHO WEBSITES MAY BE CHECKEDFOR FURTHER INFO. PL SEND THIS ALERT TO EVERYONE PLANNING TO VISIT KERALA. DO NOT COME IN CONTACT WITH ANYONE RSTURNING FROM KERALA ESP KOZHIKODE. SORRY FOR LATE NIGHT POSTING. BUT WE TEACH VIROLOGY AND KNOW THIS VIRUS AS SPREAD BY FRUIT BATS.

Detailed Analysis: Though Kerala is on high alert due to the Nipah Virus outbreak, yet there is no such alert issued by Kerala of any quarantine.

Kerala state health department has been put on high alert after the death of three people of a family in Kozhikode district in the past two weeks. As per  a report in Indian Express, a of specialists from the National Centre for Disease-Control, National Institute of Virology and Integrated Disease Surveillance Programme have been sent to Kerala by the Centre to take stock of the situation.

The CMO also tweeted saying the government was keeping a close watch of the situation:

CM Pinarayi Vijayan has informed that Government is closely monitoring the spread of the Nipah virus. Health department is doing everything possible to save the lives of the infected & prevent the advance of virus.

National Institute of Virology has confirmed from the studies on blood samples that 3 out of the 4 deaths attributed to fever was caused by the virus. The first death was reported on 19th ; the Union Health Ministry & World Health organization were contacted on the day itself.

Health minister & Labour minister have camped at the district to lead the efforts. Private hospitals have been instructed to not deny treatment for anyone suffering from fever. An expert medical team of the Union government has arrived on the request of the State Government.

Though the virus has been reported only in Kozhikode, a statewide alert has been given to remain vigilant. A 24-hour control room has been opened to monitor the situation. CM has also requested all to follow the instructions of the health department to tackle this crisis.

NiV infection in humans has a range of clinical presentations, from asymptomatic infection to acute respiratory syndrome and fatal encephalitis. NiV is also capable of causing disease in pigs and other domestic animals. There is no vaccine for either humans or animals. The primary treatment for human cases is intensive supportive care.

The WHO says that there is also documented evidence of human to human contamination.