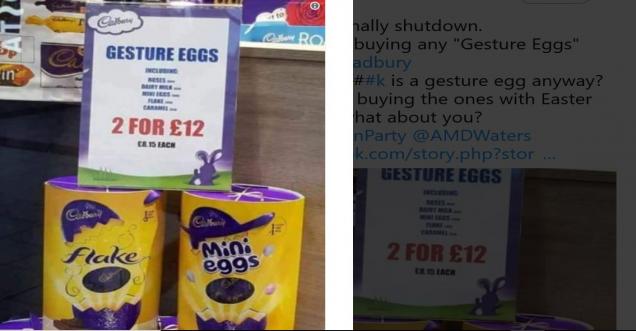 Viral Message: Easter is finally shutdown. I won't be buying any "Gesture Eggs" What the f##k is a heater egg anyway? I'll only be buying the ones with Easter on them.

Easter is finally shutdown.
I won't be buying any "Gesture Eggs" #boycottCadbury
What the f##k is a gesture egg anyway?
I'll only be buying the ones with Easter on them what about you?@ForBritainParty @AMDWatershttps://t.co/Gm8Hw0iYm4 pic.twitter.com/RGGvlomsKZ

It's all about the money. Absolute traitors, I won't forget I hope you won't either. Sensodyn Kingsmill Warburtons, add them to your list and all supermarkets who sell obscene Halal.

Our tweet about "Gesture Eggs" is performing the best. It's also causing somewhat of an offence to some. Maybe they don't like the truth. We also reached the over 1000 followers mark on Twitter. Hello, We have received a complaint regarding your account, @ForRotherham, for the following content. Tweet ID: 957346501365248000Tweet Text: Easter is finally shutdown. I won't be buying any "Gesture Eggs" #boycottCadbury What the f##k is a gesture egg anyway? I'll only be buying the ones with Easter on them what about you? @ForBritainParty @AMDWaters https://t.co/Gm8Hw0iYm4 [media] We have investigated the reported content and could not identify any violations of the Twitter Rules (https://support.twitter.com/articles/18311) or applicable law. Accordingly, we have not taken any action at this time. Sincerely, Twitter

The rumor started after Jan 27, 2018. We crossed checked with the Cadbury’s and did not find any thing which suggest for the renaming of the Cadbury’s “Easter Eggs”. Easter Eggs are nothing but Cadbury’s larger, more expensive range of eggs, typically above 286g net weight.

Gesture Eggs or the word Gesture is not used in the Cadbury’s official pages and the poster in the picture posted by ForRotherham that showcases the term “Gesture Eggs” does not appear to be a Cadbury’s orginal poster.

Hence we keep the spam message in the category of fake message as there is no such thing as Gesture Eggs.