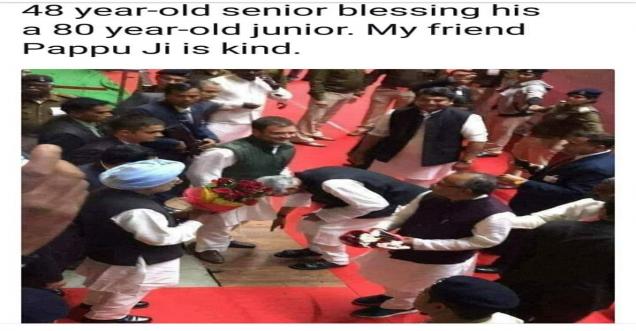 Brief Outline: A photo viral on the social media showing TS Singh fell at the feet of Congress President Rahul Gandhi, soon after the he took oath as a cabinet minister in the newly-formed Congress government in Chhattisgarh.

Facts Check Analysis: The photo is viral on the social media and is shared by many leading website portals like postcard and social media groups related to BJP and Narendra Modi with a message “48 साल का युवा 78 साल के बुजुर्ग को आशीर्वाद देते हुए”.

TS Singh Deo is born of 1952, so he is currently 67 years old and not 78 years old as claimed in the viral picture.

The Congress won in majority in Chhattisgarh, bagging 68 seats. The BJP came second with 15 seats, and Mayawati-Ajit Jogi’s JCC+ won in 7 constituencies.

The photo looks like he is indeed falling to tough down the Congress President feet, however as claimed by  a news portal patrika, which did not support the claim that Deo Singh indeed touched the feet of Gandhi. The newspaper has quoted and zoomed into the photo to show the piece of thread that had fallen near Gandhi's feet, it also explained actually what happened there.