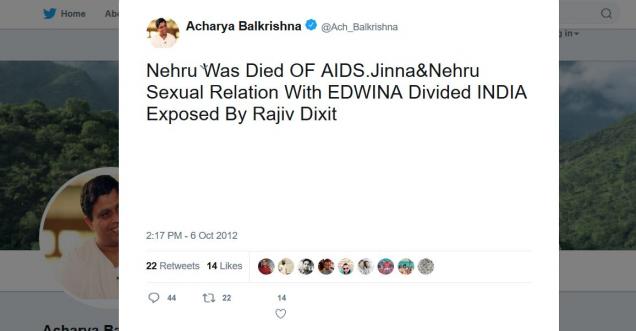 Many other people on the social media have tweeted this fake news, assuming this to be true that Nehru indeed died of AIDS. However the fact is that it is wrong.

Pandit Nehru died on May 27, 1964 and many media reports suggested that he died of Heart Attack.

Britannica in an article published on Nov 10, 2018, it clearly states that Nehru died of stroke. It writes that “Nehru’s health showed signs of deteriorating not long after the clash with China. He suffered a slight stroke in 1963, and a more-debilitating attack followed in January 1964. He died a few months later from a third and fatal stroke.”

Bbc in a article titled as, 1964: Light goes out in India as Nehru dies, BBC reported “It is believed he suffered a heart attack, and although specialists fought to save him for much of the day, he passed away early this afternoon with his daughter, Indira Gandhi, by his side. ”

Nytimes reported, “India Mourning Nehru, 74, Dead of a Heart Attack; World Leaders Honor Him”, The nytimes reported “Mr. Nehru woke at 6 A.M. (8:30 P.M. Eastern daylight time, Tuesday) and complained of pain in his shoulders. Before his physicians were called in, he had a heart attack and fell unconscious. He died in a coma eight hours later. [News of Mr. Nehru's death was published in an extra edition of The New York Times of Wednesday.]”

Theguardian reported “At 6.25 a.m. today Mr Nehru, who had gone to sleep last night "fresh and fit" after his short holiday at a hill station, had a stroke. He lost consciousness almost immediately, but not before he had complained to his valet of a pain in the back. He died without regaining consciousness, and according to a member of his household, his death was due to "an internal haemorrhage, a paralytic stroke, and a heart attack."”

So all the news reports points to a common conclusion that Pandit Jawaharlal Nehru, Prime Minister of India, died in 1964 due to heart Attack.