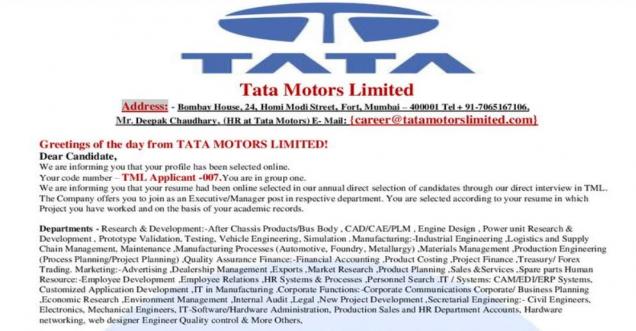 Brief Outline: A Viral message on the social media claiming to be from Tata Motors, informs of the job vacancy  from the Tata motors company.

Facts Check Analysis: The news about a letter of TATA motors, of the job selection of the candidate is false.

As per the fake post, the message tells that

We are informing you that your profile has been selected online. The message tells of the job information and the place of recruitment. It goes ahead with security deposit of amount in Cash Rs 8900.

However this information has been clarified by Tata Motors as false.

As checked by check4spam, the company responded telling “Hi, this is a fake letter. We are aware of the issue and have duly reported the same.”

Hi, this is a fake letter. We are aware of the issue and have duly reported the same.

The the above viral message as well, Tata Motors replied