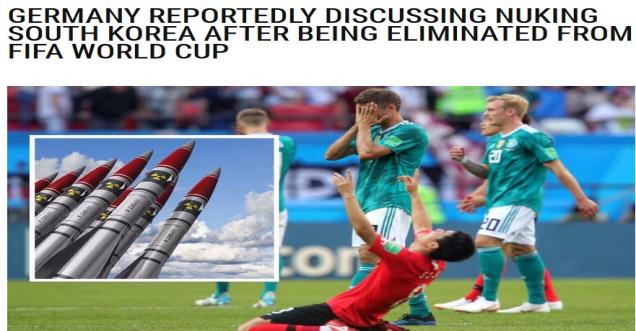 Brief Outline: German president Frank-Walter Steinmeier, “especially losing to a loser country like Korea, we must act immediately, even if it means nuclear attacks”, finished Walter

Hours after Germany was eliminated by South Korea from the FIFA World Cup in the group stages, it is being reported that German authorities are discussing a nuclear attack on South Korea.

According to reports, Germany leaders are discussing whether they should attack South Korea with nuclear weapons or not. Germany was eliminated from the FIFA World Cup today and will not make it past the group stage, which is shocking considering they hoisted the World Cup in 2014 in Brazil. Germans could simply not handle the embarrassment and are looking to punish South Korea.

“We cannot accept this” says German president Frank-Walter Steinmeier, “especially losing to a loser country like Korea, we must act immediately, even if it means nuclear attacks”, finished Walter.

Facts Check Analysis: No such news of Germany Nuking South Korea after losing from South Korea in the FIFA World Cup.

Huzlers is a fauxtire website, publishes news for entertainment purposes. The news published is not true. There is no information of German having nuclear weapons capabilities.

Going down at the bottom of the page we can find the ABOUT US section of huzlers, which read’s as Founded by Pancho Villa in 1922 Huzlers is the most infamous fauxtire & satire entertainment website in the world. If it's trending on social media you'll find it here!

The Norwegian heavy water sabotage ( Bokmål: Tungtvannsaksjonen , Nynorsk: Tungtvassaksjonen ) was a series of operations undertaken by Norwegian saboteurs during World War II to prevent the German nuclear weapon project from acquiring heavy water ( deuterium oxide), which could have been used by the Germans to produce nuclear weapons.