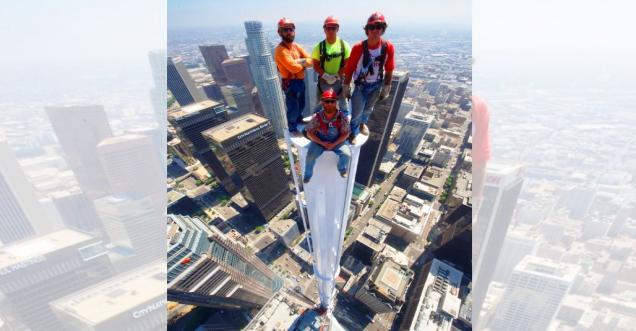 News Claim: An image viral on social media with a group of 5 people, raising gang, on top of a skyscraper. Many are doubtful if it is real.

On top of the spiral at the Wilshire Grand

Facts Check Analysis: An iconic photo of four workers posed on top of the 1100 foot high Wilshire grand center, is making the rounds on social media is not fake, but true..

The spire was affixed by a team of five members of the construction crew, also known as the “raising gang.” Mark Palmer, Dan Cobb, Eric Madrigal, Peter Veliz, and Vince Parker worked more than 1,000 feet above the street to put the final piece into place as it was lowered from a crane.

The spire and the overall design of the 1,099-foot-tall Wilshire Grand came from the architectural firm AC Martin. Chris Martin, CEO, and chairman of the Downtown-based firm said that the tower is designed to take advantage of new design rules that allow developers to have sloping or curved roofs instead of flat tops. Previous requirements were meant to allow for helicopter pads. Modern safety improvements paved the way for a new approach.

The Wilshire Grand is being developed by the Korean firm Hanjin. It replaces a comparatively low-slung hotel that had been on the northwest corner of Seventh and Figueroa streets for more than a half-century. When complete it will hold 400,000 square feet of office space, restaurants and shops, and a 900-room hotel that will be operated by the InterContinental brand.

You can see more of the picture at

Pictures and videos that make your hands sweat?